On October 20, the LNG bunkering vessel (LBV) Kaguya supplied LNG fuel to an NYK pure car and truck carrier (PCTC) at the berth of Shin Kurushima Toyohashi Shipbuilding Co. Ltd. (head office: Toyohashi City, Aichi Prefecture) — the first time in Japan for LNG fuel* to be supplied to a vessel via Ship-to-Ship bunkering.**

Sakura Leader, the PCTC that received the LNG fuel, is the first large LNG-fueled ship to be built at a shipyard in Japan. The vessel is scheduled to be delivered in late October and will be one of the largest PCTCs in the world, capable of transporting approximately 7,000 units (standard vehicle equivalent).

The IMO (International Maritime Organization) has agreed on an ambition to reduce GHG emissions from shipping by at least 50 percent by 2050, and it is expected that many vessels using LNG as the main fuel will be constructed in the future. NYK has been making a proactive effort to realize environment-friendly transportation by reducing GHG emissions. In fact, in 2015 Japan’s first LNG-fueled ship, the tugboat Sakigake, was delivered. In 2016, the world's first LNG-fueled PCTC in Europe launched. In 2017, the world's first purpose-built LNG bunkering vessel entered operation. And in 2023, the world's first large LNG-fueled coal carrier is scheduled to be delivered. NYK has been a leader in all these firsts and will continue to develop the LNG-fuel market in terms of LNG-fuel supply and sale, promote the conversion of marine fuel to LNG, and contribute to reducing shipping’s environmental burden. 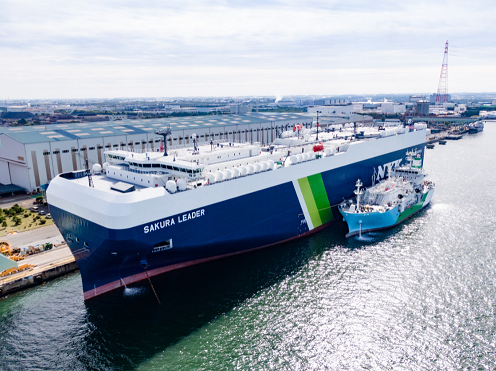 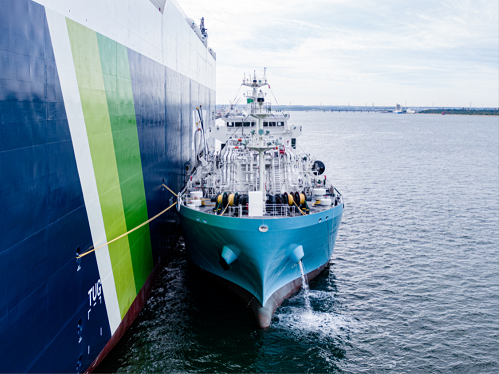 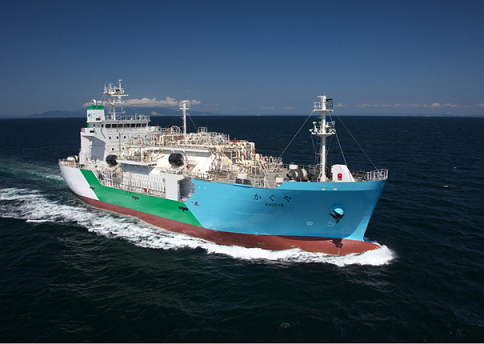 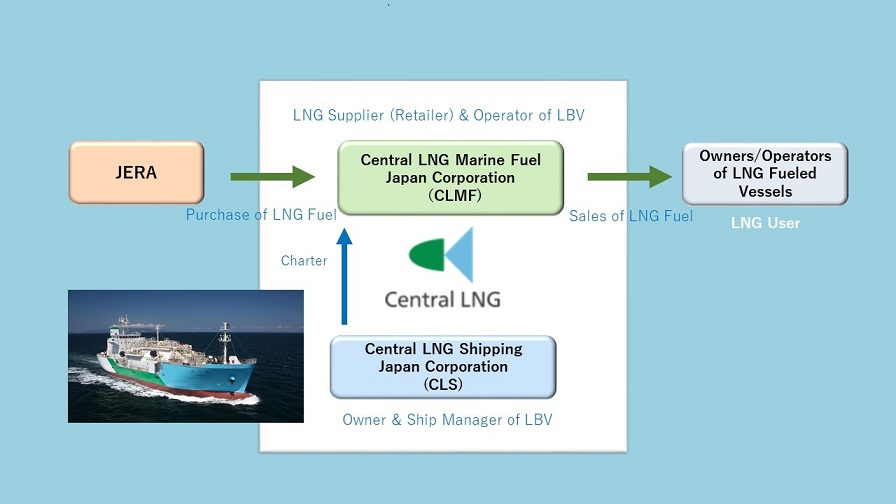 * Merits of LNG
Compared to heavy fuel oil, the use of LNG can reduce emissions of sulfur oxides (SOx) and particulate matter (PM) by approximately 100%, nitrogen oxides (NOx) by as much as 80%, and carbon dioxide (CO2) by approximately 30%.

** Ship-to-Ship Bunkering
A method of bunkering where an LNG bunkering vessel comes alongside an LNG-fueled vessel to supply LNG. This can be done at various locations, such as along the quay or pier or at anchor.

※In accordance with its medium-term management plan “Staying Ahead 2022 with Digitalization and Green,” NYK Group has indicated its goal to integrate ESG principles into management strategies to implement green business initiatives and has been dedicated to achieving the SDGs through the group’s business activities. The Group will continue its effort to contribute to the worldwide spread of LNG bunkering for ships.

Overview of Each Company