On September 1, a naming ceremony was held at Shin Kurushima Toyohashi Shipbuilding Co. Ltd. for a pure car and truck carrier (PCTC) capable of navigating oceans with only LNG as the ship’s main fuel. The vessel, which was ordered to Shin Kurushima Dockyard Co. Ltd. and is scheduled to be delivered in October 2020, will be the first large LNG-fueled PCTC to be built in Japan. Beginning with this ship, NYK will proceed with the replacement of vessels in its PCTC fleet with next-generation eco-friendly ships.

The ceremony was attended by Yoji Matsuyama, Deputy Chief Officer of Purchasing Group of the Toyota Motor Corporation (head office: Toyota city, Aichi prefecture; president: Akio Toyoda); Tetsuya Yagi, Parliamentary Vice-Minister of the Ministry of the Environment; Masamune Wada, Parliamentary Vice-Minister of Land, Infrastructure, Transport and Tourism; Hitoshi Nagasawa, president of NYK; and a number of related parties. The ship was named “Sakura Leader,” taking its name from the Japanese word for “cherry blossoms,” the national flower of Japan, with a wish for realizing and passing on a flourishing environment to the next generation through eco-friendly transportation.

This ship will be one of the world’s largest PCTCs, capable of transporting approximately 7,000 units (standard vehicle equivalent) per voyage, beginning with vehicles produced by the Toyota Motor Corporation.

The IMO (International Maritime Organization) has agreed on an ambition to reduce GHG emissions from shipping by at least 50 percent by 2050, and NYK has been making a proactive effort to realize environment-friendly transportation by reducing GHG emissions. In fact, in 2015 Japan’s first LNG-fueled ship, the tugboat Sakigake, was delivered, and in 2017 the world's first purpose-built LNG bunkering vessel entered operation, which allowed NYK to expand its range of business to include LNG-fuel supply and sale. In the field of large cargo ships, NYK is positioning LNG fuel as one of the bridge-solutions until future zero-emission ships are realized. Sakura Leader takes the lead in NYK’s plan to switch its operating ships to LNG-fueled vessels.

By switching fuel to LNG and modifying vessel design, ships can become about 40% more energy efficient (by reducing CO2 emissions per unit of transport). These new LNG-fueled vessels are also expected to reduce sulfur oxide (SOx) emissions by approximately 99% and nitrogen oxides (NOx) by approximately 86% compared to ships using conventional heavy oil–fired engines. Accordingly, LNG-fueled ships can meet the below requirements, including those that will become effective in the future:

Sakura Leader was selected as a model project by Japan’s Ministry of Environment and Ministry of Land, Infrastructure, Transport and Tourism, and will receive support from the ministries for technical verification of CO2 emission reductions during actual voyages.

In accordance with its medium-term management plan “Staying Ahead 2022 with Digitalization and Green,” the NYK Group has incorporated environmental, social, and governance (ESG) criteria in the company’s business strategies, and seeks to enhance the company’s corporate value as well as contribute to sustainable development of society through business activities. Promoting replacement to next-generation eco-friendly ships in the PCTC fleet is one of the group’s activities. 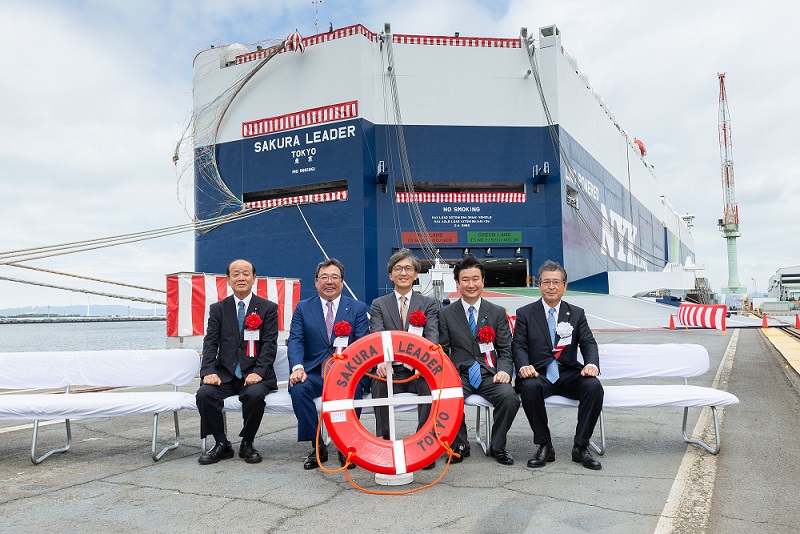 
* SOx Global Cap regulations
SOx emission regulations based on the 2008 amendment of the 1997 protocol on ship pollution prevention (Annex VI of the MARPOL Convention). From January 1, 2020, the allowable limit of sulfur in ship fuel oil was reduced from 3.5% to 0.5%.

** EEDI requirements
Regulations on the energy efficiency of ships based on the 2013 revision of the International Convention on the Prevention of Ship Pollution 1997 Protocol (Appendix VI to the MARPOL Convention). EEDI (Energy Efficiency Design Index) is the number of grams of carbon dioxide (CO2) required to carry 1 ton of cargo for 1 mile, and the reduction rate from the baseline (baseline) will be gradually enhanced. Car carriers are required to implement reductions of 5% by 2015 (Phase 1), 15% by 2020 (Phase 2), and 30% by 2025 (Phase 3).


- The NYK Group is dedicated to achieving the SDGs through its business activities, and this low carbonization of marine fuel is one of the group’s initiatives.