NYK announced the promotion of Akihiro Mori to the position of captain, effective April 1, 2020.

In fiscal 2006, NYK began to hire graduates from ordinary four-year universities to undergo extensive in-house training for positions on board vessels. Over the course of two years after joining the company, these employees receive education and onboard training that enables them to obtain a seafarer’s license, after which they are provided with onboard experience as deck officers or engineers, eventually working toward the rank of captain or chief engineer.

Japanese seafarers are conventionally sourced from a maritime university such as the University of Mercantile Marine and the National College of Maritime Technology. However, in order to secure a stable supply of human resources from a wide range of sources, NYK decided to begin its own internal training program in fiscal 2006.

Generally, 15 to 16 years is needed before attaining the position of captain or chief engineer, and Captain Mori is the first to be promoted to the rank of captain after participating in this internal program.

NYK Senior Managing Corporate Officer Tomoyuki Koyama, a captain himself, commented, “With experience on board, Japanese seafarers support our ESG management by providing technical support for development of new technology, human education, and digitalization, as well as ship and cargo management onshore. Since more onboard expertise and diversity are required of seafarers at the forefront when NYK enters new businesses such as offshore businesses and offshore wind-power generation businesses, we will continue to secure and foster excellent Japanese seafarers to improve our competitiveness.”

Akihiro Mori, the first to attain the position of captain under NYK’s in-house training system, remarked, “Although the seafarer profession is tough and challenging, it is a worthwhile lifetime path. Opportunities are expanding both offshore and onshore, and I welcome young students who have the dream of taking this journey, working together, and overcoming hardships.”

NYK currently has about 600 Japanese seafarers, of which 100 have been internally trained. In fact, the number of new employees being internally trained is nearly equal to graduates sourced from maritime colleges.

The company will continue to nurture seafarers to ensure a diverse range of highly experienced human resources who can provide our customers the safest shipping services.

Akihiro Mori joined NYK in 2006 as a member of the inaugural class of internally trained seafarers after graduating from a general four-year university. NYK then enrolled him at the Marine Technical College, where he received basic maritime training in a newly established course. He continued his studies at the National Institute For for Sea Training (currently the Japan agency Agency of Maritime Education and Training for Seafarers) and eventually completed onboard training on NYK-operated ships to acquire his seafarer’s license.

Afterward, he served as an officer on car carriers, LNG carriers, and dry bulk carriers, among others, and was active in a number of fields. He was also able to use his onboard experience in work at the NYK head office. Last year, he obtained the seafarer’s license of a 1st grade maritime officer seafarer’s license, and he was then appointed captain on April 1. After several years of office work, he will begin his voyages at the helm as a captain. 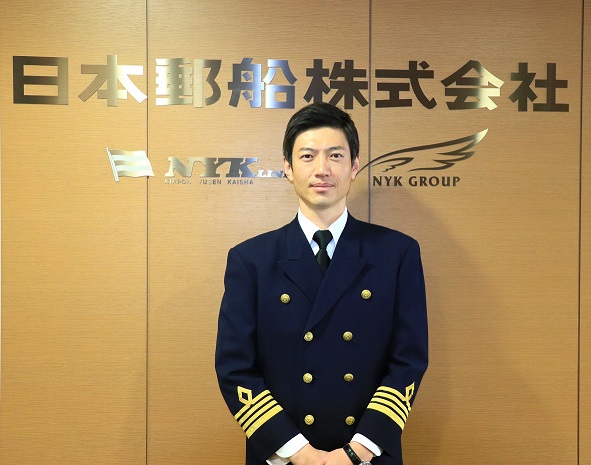 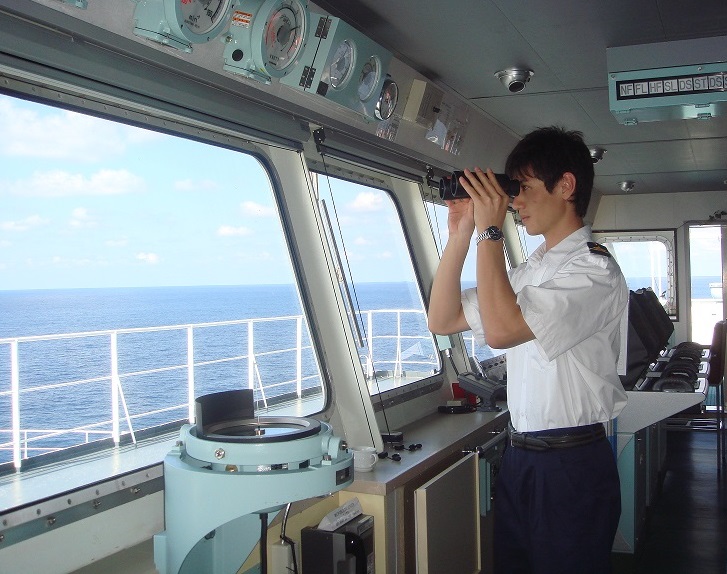 Mori on board as a third officer in 2008

- History of Japanese Seafarers at NYK