NYK PCTC Supports in Rescue Operation off the Coast of France 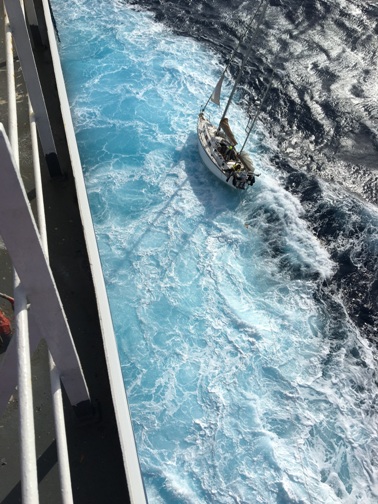 Coral Leader staying on the windward
Coral Leader, a Pure Car and Truck Carrier (PCTC) owned by NYK supported the rescue operation of five people including two children onboard yacht. The operation was conducted by French Maritime Rescue Coordination Centre (MRCC) on August 26 (local time) off the coast of France.

While Coral Leader was sailing from the port of Livorno, Italy, to the port of Tarragona, Spain, the vessel received a call from MRCC to cooperate in the rescue operation of a yacht. The ship immediately headed to the instructed area. The ship stayed on the windward to protect the yacht from the strong wind and high waves until a total of the five were rescued by the helicopter.