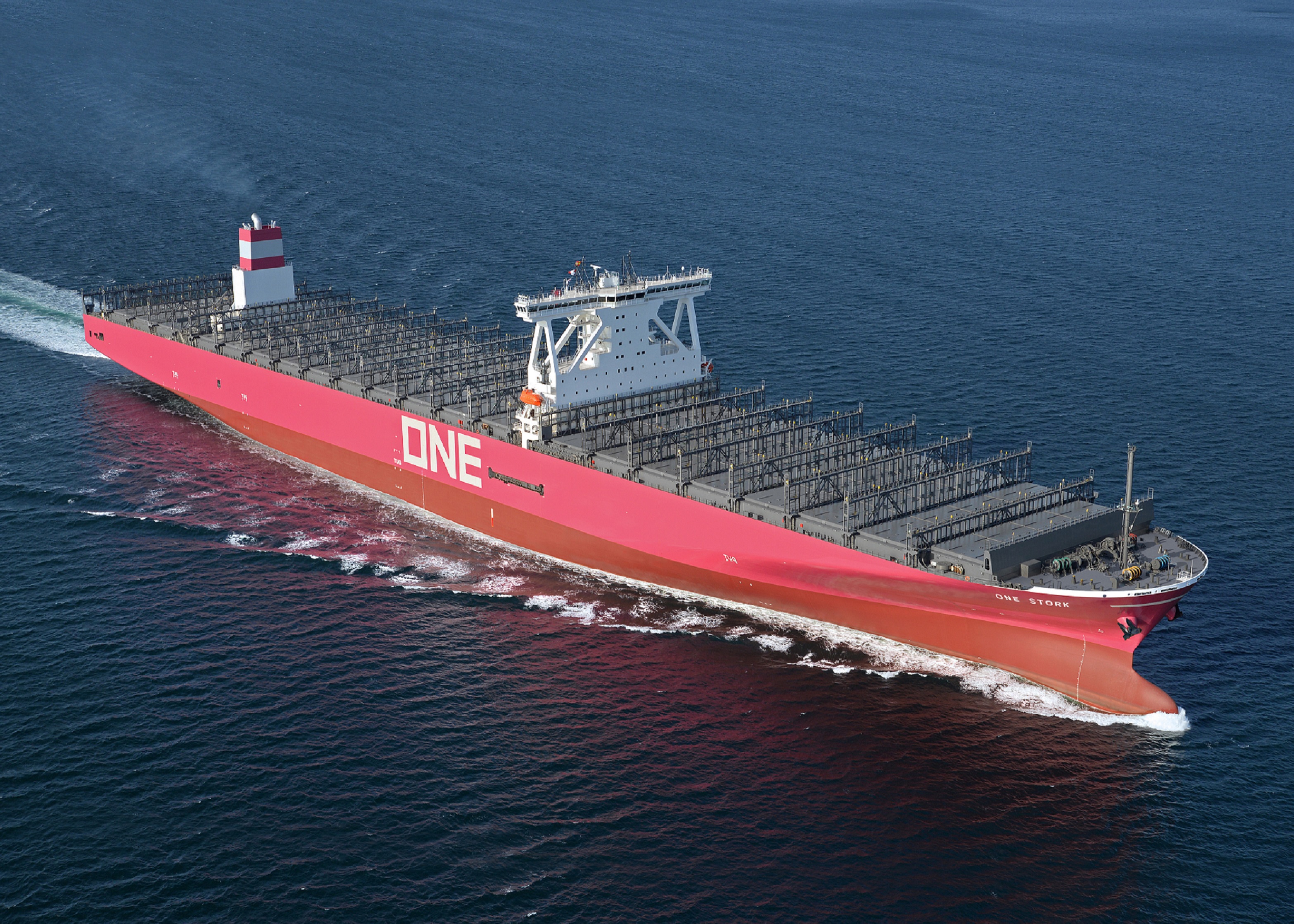 ONE STORK
On June 11, a naming ceremony was held at the Kure shipyard of Japan Marine United Corporation (JMU) for a new containership that will be chartered from NYK by Ocean Network Express Pte. Ltd. (ONE).* This vessel is the first newly built containership whose hull has been painted in ONE’s corporate color, magenta. The ship was delivered on June 12 and is the 10th of 15 advanced 14,000 TEU containerships that NYK has ordered. The new vessel will transport containers along a route connecting Asia to the east coast of North America through the Suez Canal.

The ceremony was attended by NYK managing corporate officer Hiroki Harada and ONE representatives, and the ship was named “ONE Stork.” In ancient European folklore, homes where storks settled were considered to be enriched with happiness, prosperity, and protection.

All ships in this series have been adorn with the names of birds, and like its sister ships, ONE Stork’s main engine is equipped with a dual rating system that allows the vessel to realize optimal fuel consumption. Optimization of fuel consumption when slow-steaming makes it possible to meet the Energy Efficiency Design Index (EEDI)** requirements. Moreover, the ship’s hull form allows for improved cargo-loading efficiency.

Under the support of by the Ministry of Land, Infrastructure, Transport and Tourism (MLIT), NYK, JMU, MTI Co. Ltd., and other marine manufacturers are conducting joint research utilizing big data for the prevention of vessel machinery plant trouble, and this ship is subject to this research. The research team will collect and analyze data from actual voyages and make efforts to further improve safety and economic efficiency.

In accordance with its new medium-term management plan “Staying Ahead 2022 with Digitalization and Green,” the NYK Group seeks to create new value by making use of big data and the latest digital technology. The NYK Group encourages the success of ONE's business by enhancing the competitiveness of container shipping through safer and more efficient operations.

** Energy Efficiency Design Index (EEDI)
An indicator for assessment of CO2 emissions per primary unit (ton-mile) based on specifications at the vessel design/construction stage. Calculation of the EEDI is mandatory for newly manufactured vessels, and a certificate indicating the EEDI specific to each vessel is issued. The regulations will be strengthened in stages in the future, in 2020 (Phase 2) and 2025 (Phase 3).