Today, Hikawa Maru, the only existing large-scale cargo-passenger ship built in Japan before the war, celebrates its 88th anniversary since delivery. Since 2008, Hikawa Maru has been moored at Yamashita Park in Yokohama as a museum ship open to the public. A celebration of its 88th birthday was held on Saturday, April 21, and about 8,000 guests visited.

On April 25, 1930, Hikawa Maru was delivered equipped with the latest diesel engine and advanced safety technology, and shortly afterward assigned to the Japan–Seattle Line for cargo-passenger service. During World War II, the vessel was requisitioned by the Japanese government as a navy hospital ship, and even though it struck mines on three separate occasions, Hikawa Maru survived as Japan's only large passenger liner to avoid being sunk during the war. After the war, the ship continued in service as a hospital ship and was used to repatriate Japanese servicemen. In 1947, the vessel was refitted as a cargo-passenger ship and again placed in service on the Japan–Seattle Line.

In 1960, Hikawa Maru was decommissioned after 30 years of service. During the ship’s time at sea, it made 254 Pacific crossings and carried a total of more than 25,000 passengers (except for the period the ship was requisition by the government). The vessel has since become a familiar symbol of the port of Yokohama. In 2008, NYK reclaimed ownership, restored the vessel to its original state, and gave the museum ship the name of "NYK Hikawamaru." In 2016. the vessel was designated as a nationally Important Cultural Property.

Through the NYK Maritime Museum and NYK Hikawamaru, NYK continues to make every effort to safeguard key items to preserve the historical links between the Japanese maritime industry and society, and thus enhance the maritime spirit. 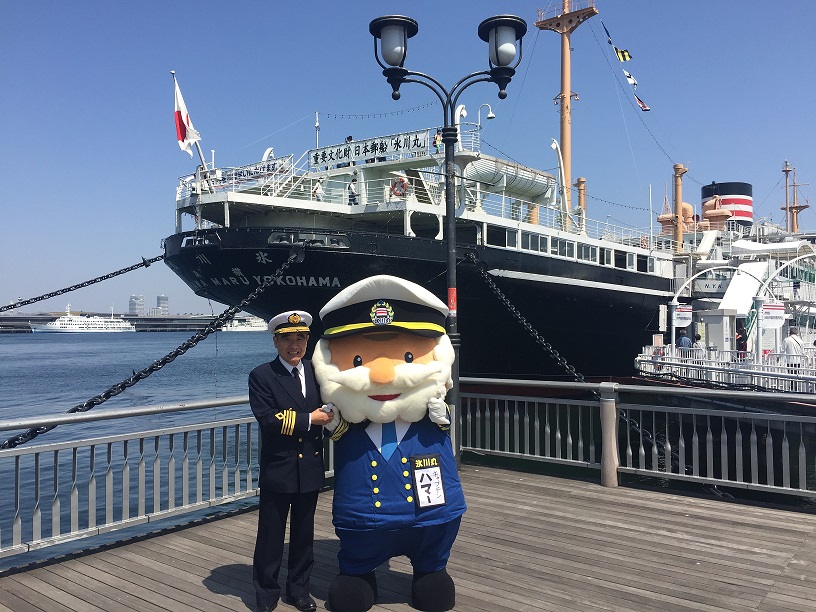 From left, Norio Kanaya, captain of Hikawa Maru, with Hammer, honorary captain of the vessel

-- NYK Maritime Museum
Examines the history of Japan’s maritime transport industry since the establishment of NYK in 1885. Website: http://www.nyk.com/rekishi/e/

-- Announcement on September 21, 2016,“Hikawa Maru Designated as Important Cultural Property,” http://www.nyk.com/english/release/4208/004434.html
The news on this website is as of the date announced and may change without notice.