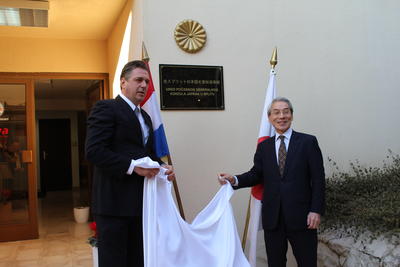 From left
Ivan Vodopivec Jr., the Honorary Consul General of Japan
Keiji Takiguchi, the Ambassador of Japan to Croatia
Ivan Vodopivec Jr., the representative of the Croatian office of NYK Shipmanagement Pte. Ltd., has been recognized by the Japanese government as an Honorary Consul General of Japan* for the port city of Split, the second largest city in Croatia. As a result of this recognition, an Honorary Consulate has been established at the office of NYK Shipmanagement Pte. Ltd., a subsidiary of NYK.
Vodopivec is also CEO of Iva Shipping Ltd., which has employed and trained Croatian crew for NYK vessels for many years. The contributions to building a close relationship between Japan and Croatia have been recognized by the Japanese Government.
A ceremony was held in January, attended by the Ambassador of Japan to Croatia, Keiji Takiguchi, who offered his hopes for an expansion of ties between the two countries.
The NYK Group will continue with its efforts to strengthen relations between Japan and Croatia through the maritime industry.
* Honorary Consul General of Japan
A recognition bestowed by the Japanese government to protect the interests of Japanese and promote cultural exchange in cities without diplomatic mission.
The news on this website is as of the date announced and may change without notice.