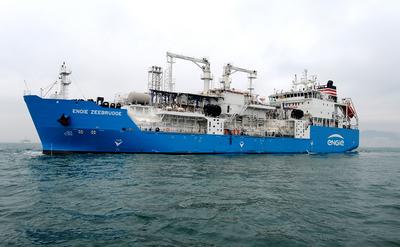 ENGIE, Fluxys, Mitsubishi Corporation, and NYK have taken delivery of the world’s first purpose built liquefied natural gas bunkering vessel (LBV) from Hanjin Heavy Industries & Construction Co. Ltd., at the Yeongdo shipyard in Busan, Korea. She will run on LNG for her maiden voyage, after a few days of loading LNG delivered by trucks at the shipyard.
Home port Zeebrugge, Belgium
Zeebrugge in Belgium will be the home port of the vessel, which has been named ENGIE Zeebrugge accordingly. From there, the 5,000 m3 LNG capacity LBV will supply LNG as a marine fuel to ships operating in Northern Europe. The two LNG-fueled pure car and truck carriers (PCTC) operated by United European Car Carriers will be its first customers. ENGIE Zeebrugge will load LNG at Fluxys’ LNG terminal in Zeebrugge, where small carriers with capacities from 2 000 m3 can dock at the recently commissioned second jetty.
Milestone in the development of the European LNG bunkering chain
As international regulations on emissions for ships tighten, LNG is expected to become an important alternative fuel for the maritime industry. Currently, the bunker market amounts to approximately 250 million tons of heavy fuel oil per year. The challenge in making LNG grow in the bunker market is to develop sufficient supply infrastructure to support the increasing number of LNG-fueled ships that are expected to come into operation. ENGIE Zeebrugge, in this respect, marks a milestone in the development of the European LNG bunkering chain. While LNG-fueled ships up to now have been largely dependent on fixed bunker locations or the limited bunkering capacity of LNG trailers, ENGIE Zeebrugge, the first purpose built LNG bunkering vessel, has been designed to service a variety of LNG-fueled ships.
Gas4Sea: marketing LNG as a marine fuel
Last September, ENGIE, Mitsubishi Corporation and NYK launched “Gas4Sea”, a brand name for marketing ship-to-ship LNG bunkering services worldwide, firstly via the ENGIE Zeebrugge in Northern Europe.
Under this common brand, the three partners intend to support the development of LNG as a marine fuel, thus contributing to an environmentally friendly maritime industry.
Ever more stringent emission regulations for ships
The requirements applicable to ships for controlling NOx , SOx  and CO2 emissions are getting stricter year by year. As from January 2015, regulatory emission limits for SOx  have been reduced by the International Maritime Organisation (IMO) from 1.0% to 0.1% in the so-called Emission Control Areas (ECAs, which include the North Sea, the Baltic Sea area and areas around North America). More recently, according to a decision by IMO, emission limits for SOx will be reduced outside the ECAs from the current 3.5% to 0.5% as of January 2020.
Distinctive environmental benefits of LNG
Due to its favourable emission profile, the widespread adoption of LNG as a marine fuel is key to curb emissions of SOx and other harmful emissions in the shipping industry. As it goes, the operation of LNG-fueled ships can result in a reduction of nearly all emissions of SOx and particulate matter (PM), compared to ships powered with conventional fuels. LNG use can also reduce CO2 emissions by up to 25% and NOxemissions by more than 80% compared to gasoil. 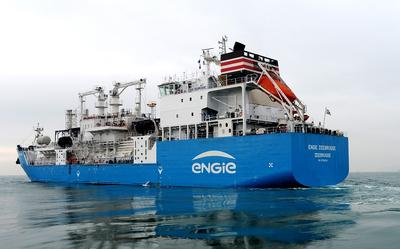 Press contacts
Fluxys
Rudy Van Beurden
Tel.: +32 2 282 72 30
rudy.vanbeurden@fluxys.com
ENGIE
Tel.: +33 (0)1 4422 2435
engiepress@engie.com
NYK
No.1 Public Relations Team
Tel.: +81 3 3284 5197
prteam@nykgroup.com ENGIE
Mitsubishi Corporation
Press Relations Team
Tel.: +81 3 3210 2171
Fax: +81 3 5252 7705
About ENGIE
ENGIE develops its businesses (power, natural gas, energy services) around a model based on responsible growth to take on the major challenges of energy’s transition to a low-carbon economy: access to sustainable energy, climate-change mitigation and adaptation and the rational use of resources. The Group provides individuals, cities and businesses with highly efficient and innovative solutions largely based on its expertise in four key sectors: renewable energy, energy efficiency, liquefied natural gas and digital technology. ENGIE employs 154,950 people worldwide and achieved revenues of €69.9 billion in 2015. The Group is listed on the Paris and Brussels stock exchanges (ENGI) and is represented in the main international indices: CAC 40, BEL 20, DJ Euro Stoxx 50, Euronext 100, FTSE Eurotop 100, MSCI Europe, DJSI World, DJSI Europe and Euronext Vigeo (World 120, Eurozone 120, Europe 120 and France 20).
www.engie.com/en/
About Mitsubishi Corporation and its Energy Business
Mitsubishi Corporation currently has eight Business Groups which develop operations in the diverse fields of Global Environment & Infrastructure Business Development; Business Service Industrial Finance, Logistics & Development; Energy; Metals; Machinery; Chemicals; and Living Essentials.
Mitsubishi Corporation’s Energy group aspires to make a valuable contribution to society through the provision of stable supplies of energy. Our business model seeks to cover areas ranging from upstream to downstream in the energy value chain. We explore for, develop and produce oil and gas, and have investments in numerous LNG projects and related business model worldwide.www.mitsubishicorp.com/jp/en/
About NYK
Nippon Yusen Kabushiki Kaisha is one of the world's leading transportation companies. At the end of March 2016, the NYK Group was operating 821 major ocean vessels, as well as fleets of planes and trucks. The group’s vessel fleet includes 68 LNG carriers (including those owned by equity method affiliates) and 68 other types of tankers operated in the energy transportation division. Also in August 2015, the innovative LNG-fueled tugboat named “Sakigake” was added to the fleet.
With unceasing efforts for the quality improvement, NYK Group is expanding LNG transport business, the shuttle tanker business, and Floating production storage and offloading (FPSO) business together with leading business partners and customers. www.nyk.com/english/
About Fluxys
Fluxys is a Belgium-based, fully independent gas infrastructure group. The company is a major gas transit operator and its offering combines gas transmission, gas storage and terminalling of liquefied natural gas (LNG). Present across Europe, the company focuses on safe, efficient and sustainable operations, quality services in line with market expectations and creating long-term value for its shareholders.
Besides its pipeline, storage and LNG terminalling assets in Belgium (owned and operated by NYSE Euronext listed Fluxys Belgium), Fluxys’ partnerships include ownership in the Interconnector and BBL pipelines linking the UK with mainland Europe, the Dunkirk LNG terminal in France, the NEL and TENP pipelines in Germany, the Transitgas pipeline in Switzerland, the Swedegas infrastructure in Sweden and the TAP pipeline from Turkey to Italy under construction to bring gas coming from Azerbaijan and potentially other sources to Europe. www.fluxys.com