NYK Group Company, NiMiC Ship Management Co., Ltd. (hereinafter referred to as NiMiC), an overseas ship management company based in Taipei, has appointed a local seafarer to the position of chief engineer for the very first time. On August 19, Lee Chia-Chu, whom NiMiC had trained as a cadet since he began his studies as a university student, was promoted to the rank of chief engineer of an LNG carrier being managed by NiMiC.

Lee participated in training on board an NYK carrier for six months in 2011 and graduated from university in 2012. He started his carrier as third engineer in 2014 and currently has 10 years of experience working on LNG carriers. Over the past decade, he took part in training conducted by the NYK Maritime College,* which is original training provided by NYK Shipmanagement, a group company of NYK, in addition to onboard training on an LNG carrier. Lee joined the vessel at dry dock on August 19, and after completing turnover procedures while at dry dock with his predecessor, Lee began his duties as the vessel’s chief engineer from September 9.

Most of the seafarers serving on LNG carriers under NiMiC management were Filipino or Indian in 2009. But after discussions with CPC Corporation, Taiwan began to train local seafarers, and NiMiC and NYK established a training scheme for local university students to become cadets with the cooperation of National Taiwan Ocean University and National Kaohsiung University of Science and Technology. Since then, 24 cadets from the two universities have received training.

NYK will continue to train excellent local seafarers and contribute to the development of local maritime industries. 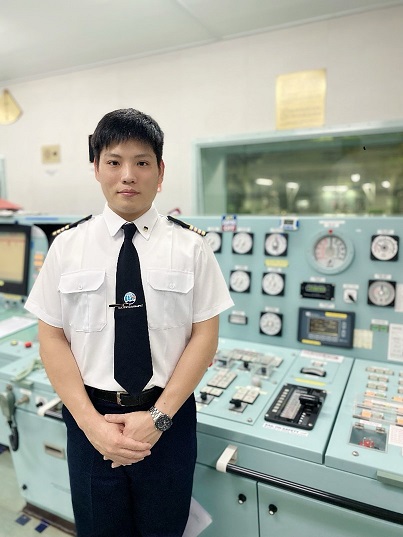 Comment by Lee Chia-Chu:
It’s my honor to be the first Chief engineer and the pioneer of all local seafarer on board LNG carrier. I appreciate all the support I received from everyone for building local seafarer training program.

Since I was a cadet, I received solid training on board and ashore established by NYK. Sincerely appreciate all the colleagues who have guided me all the way up to my current position and NiMiC ship management providing me valuable experience attending several dry docking and modifications.

As a chief engineer in NYK group I will continue contributing my effort to make sure the safety on board and business of vessel intact.

On February 3, 2021, NYK released the “NYK Group ESG Story,” which aims to further integrate ESG into the company’s management strategy and promotes activities that contribute to the achievement of the SDGs through business activities. On March 24, 2022, NYK released the updated “NYK Group ESG Story 2022,” which introduces initiatives for integrating ESG into the Group’s management strategies set forth in the "NYK Group ESG Story" and provides a partial explanation of the Group’s sustainable growth strategy from a long-term perspective.