Toward the realization of an eco-friendly green terminal

To operate the wind-power generation business at the finished-vehicle logistics terminal in Zeebrugge, ICO has established the joint-venture company ICO Windpark NV together with Portfineco and ENGIE. Portfineco is a subsidiary company of the Port of Zeebrugge,** and ENGIE*** is a worldwide reference group for carbon neutral energy and services.

The wind turbines were designed and installed with due consideration for the surrounding environment. The 11 units have a total capacity of 44 MW, which will cover the entire annual power demand at the terminal. Surplus power will be sold.

According to Svein Steimler, chairman of ICO and ICO Windpark, ICO wants to be not only the largest RORO terminal in the world but also the greenest terminal through initiatives such as the use of wind turbines, solar panels on the PDI centers, water-recovery systems for the car wash (washing 500 cars with only 20 liters of rainwater), heat pumps for heating buildings, LED lights for terminal lighting, EV shuttle cars, and at a later stage cold ironing for ships.

In the future, NYK will consider utilizing the knowledge cultivated at Zeebrugge for finished-vehicle logistics terminals operated by NYK Group companies throughout the world. 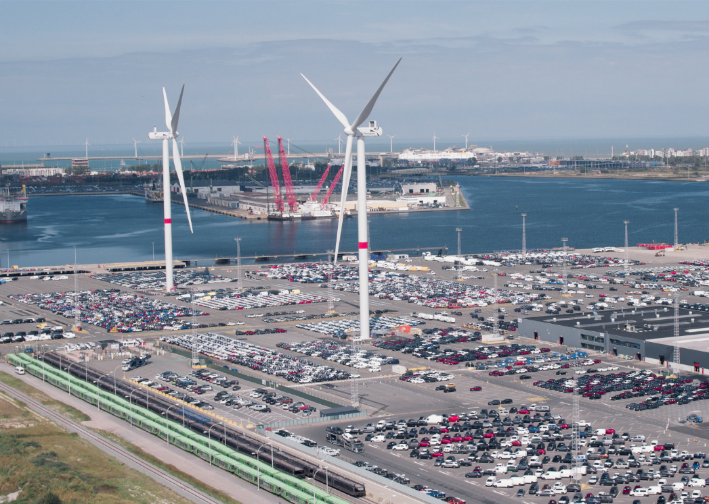 On February 3, 2021, NYK announced the NYK Group ESG Story, which aims to further integrate ESG into the company’s management strategy and promotes activities that contribute to the achievement of the SDGs (Sustainable Development Goals) through business activities, including the installation of wind turbines, which is part of the operation of "green terminals."**** To strongly promote ESG management, the NYK Group will encourage new value creation as a sustainable solution provider through a business strategy that includes expansion of its “green terminals” globally.