NYK Donates Excavators in Support of River Cleanup in Manila

A hand-over ceremony was held on June 6 for an NYK donation of 2 excavators to be used for Pasig River and Tullahan River (Fig. 1) cleanup efforts being implemented by the San Miguel Corporation (SMC),* a major conglomerate in the Philippines. The ceremony was attended by Ramon Ang, president of San Miguel Corporation; Kazuhiko Koshikawa, ambassador extraordinary and plenipotentiary of Japan to the Republic of the Philippines; Jonas Leones, undersecretary of the Department of Environment and Natural Resources of the Philippines; and Hitoshi Nagasawa, president of NYK. 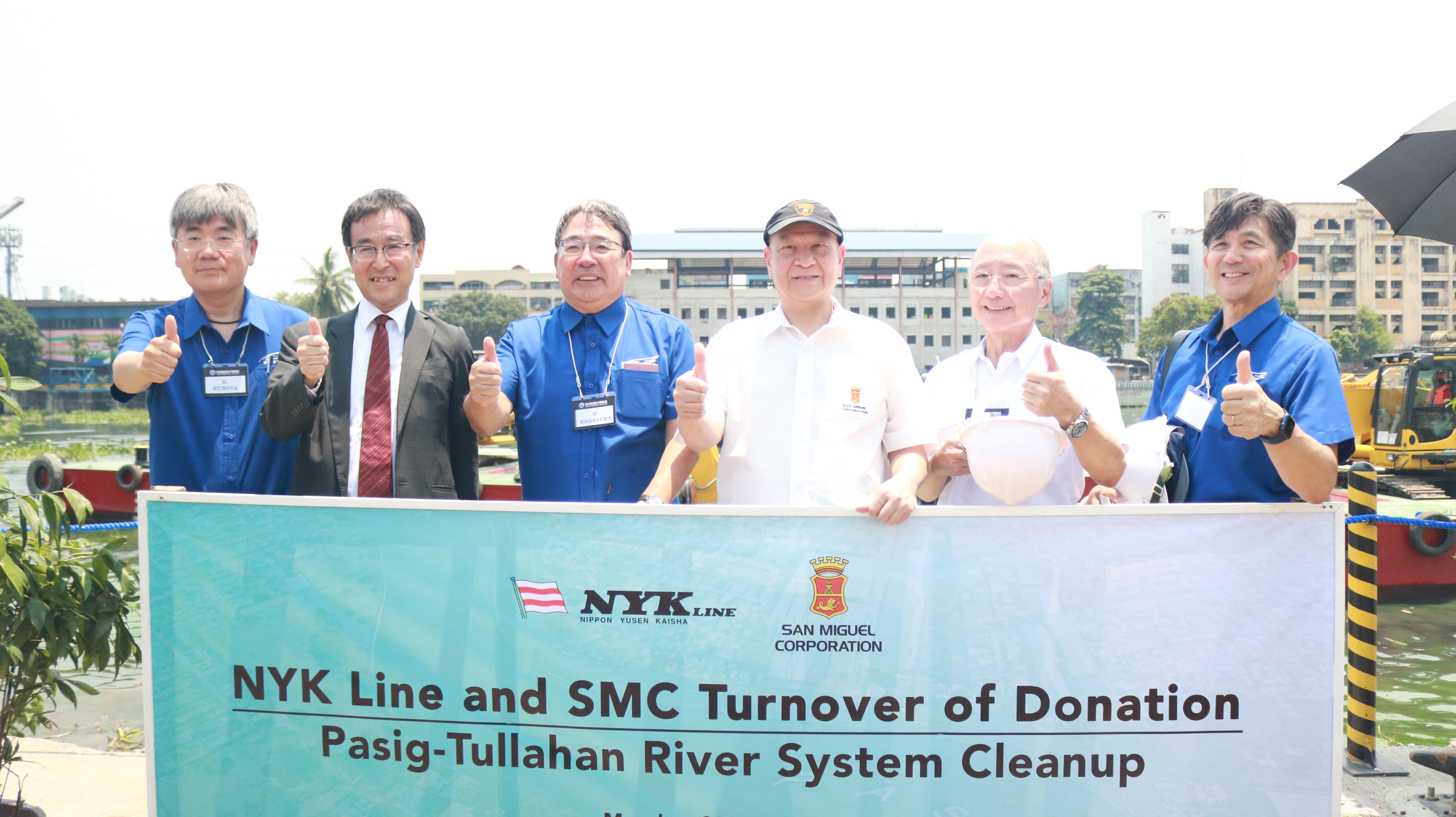 The Pasig and Tullahan rivers, which cross the metropolitan Manila area and flow into Manila Bay, are highly polluted and filled with sedimentary mud and waste that raises the riverbed and causes flooding. For this reason, it is thought that the recovery of these rivers will lead to the improvement of environmental problems and the reduction of marine microplastics.**

SMC is currently dredging and cleaning the Pasig River, along with the Tullahan-Tinajeros River system, to mitigate flood damage and prevent the discharge of waste into the ocean (Figure 2). In November last year, NYK endorsed the project and decided to donate $1.5 million over five years. The excavators purchased with this donation and donated will be used for dredging and cleaning these rivers. The excavators were transported from Japan to the Philippines by vessels operated by NYK, and in the Philippines by tractor trucks managed by Yusen Logistics Co. Ltd. The entire transport process was conducted by the NYK Group.

At the ceremony, San Miguel president Ramon Ang offered his gratitude by saying,

“We are deeply honored and thankful to receive this donation to boost our river rehabilitation operations at a time when heavy rains and typhoons threaten most Metro Manila cities with severe flooding. This cooperation highlights the same mindset that San Miguel and NYK have in expanding our sustainability initiatives, particularly in conserving water resources. We hope that this will encourage other companies in the country to cooperate with each other in aggressively pursuing initiatives that will benefit future generations,”

NYK president Hitoshi Nagasawa expressed his gratitude to Mr. Ang and others for providing NYK with the opportunity to participate in this project and for the hospitality accorded during the ceremony. In addition, President Nagasawa spoke about the history of NYK and the company’s efforts in the Philippines, particularly in support of Filipino seafarers: “I am optimistic that our newfound relationship with the San Miguel Corporation will lead to deeper communication and allow us to seek more opportunities for the benefit of Filipinos and the Philippines."

In February 2021, NYK released the “NYK Group ESG Story,” which aims to further integrate ESG into the company’s management strategy and promotes activities that contribute to the achievement of the SDGs through business activities. In March this year, NYK released the updated “NYK Group ESG Story 2022,” which introduces initiatives for integrating ESG into the Group’s management strategies set forth in the "NYK Group ESG Story" and provides a partial explanation of the Group’s sustainable growth strategy from a long-term perspective.

In addition to this project, NYK provided support to the Philippines last October by donating printers and copy paper for the purpose of educational support, and the company has additionally been of support to street children. In fact, on May 29 NYK received an award from the Philippine Red Cross for the company’s years of social activities.

These activities are being done in the world's largest seafarer producing country, and NYK believes that its efforts will "give back to the Philippines," with which the NYK Group has a deep relationship through the recruitment and development of seafarers for the Group.

In addition, the elimination of marine plastic pollution is positioned as a social issue that the Group should address as a way to "giving back to the ocean," and this initiative is one of them. The NYK Group will continue to embody its corporate philosophy of contributing to the realization of a better global society. 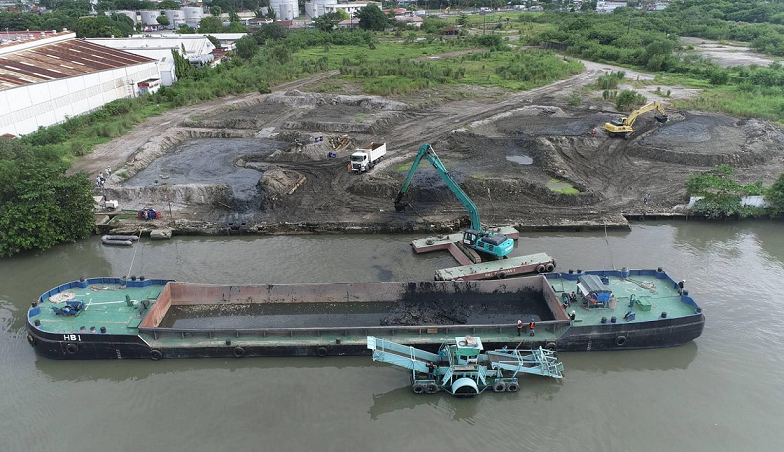 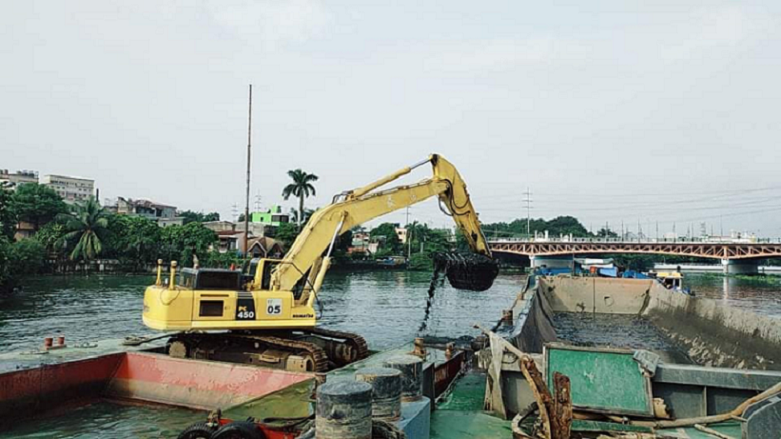 Dredging and cleaning of the river.
An excavator takes out the mud that has accumulated at the bottom of the river and moves it to the barge.


* San Miguel Corporation
A major conglomerate in the Philippines founded in 1890 as a beer manufacturer. The company has since diversified into packaging, power, petroleum, infrastructure, telecommunications, real estate, aviation, finance, and other businesses, in addition to beverages and food. Website: https://www.sanmiguel.com.ph/

** Microplastics
Small particles less than 5 millimeters in diameter that are formed from plastic debris discharged into the ocean and broken down by UV radiation and waves. These particles are feared to not only generate ocean pollution but also impact the ecosystem.