A dual-fuel LNG (liquefied natural gas) shuttle tanker1 ordered by Knutsen NYK Offshore Tankers AS,2 which is an affiliate of NYK, was delivered on August 30 at Daewoo Shipbuilding & Marine Engineering Co. Ltd. The vessel has been named “Sindre Knutsen.”

Like its sister ship “Frida Knutsen,” which was delivered on 2 August, this vessel will be a dual-fuel shuttle tanker that can use not only heavy fuel oil but also LNG. The ship will use LNG fuel, which is more environmentally friendly than conventional oil-fuel and will be equipped with a VOC recovery system3 and an energy storage system,4 thereby reducing greenhouse gas emissions.

The vessel will be chartered to ENI Trade & Biofuels S.p.A, a subsidiary of Ente Nazionale Idrocarburi S.p.A (ENI),5 and will be engaged in oil transportation in the North Sea and Barents Sea.

In February 2021, NYK released the “NYK Group ESG Story,” which aims to further integrate ESG into the company’s management strategy and promotes activities that contribute to the achievement of the SDGs through business activities. In March this year, NYK released the updated “NYK Group ESG Story 2022,” which introduces initiatives for integrating ESG into the Group’s management strategies set forth in the "NYK Group ESG Story" and provides a partial explanation of the Group’s sustainable growth strategy from a long-term perspective.

To strongly promote ESG management, the NYK Group is encouraging the creation of new value as a sustainable solution provider through the gradual introduction of low-carbon marine fuel. 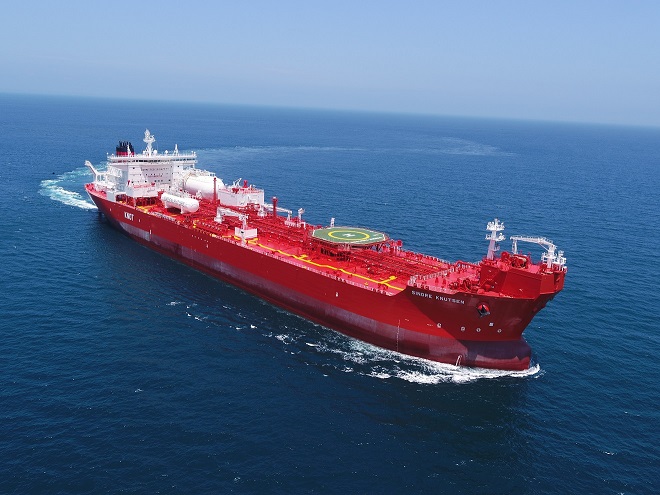 
1 A shuttle tanker loads crude oil from floating production, storage, and offloading (FPSO) units in deepwater ocean fields while maintaining a certain distance, and then transports the oil to crude-oil storage units or petroleum storage stations on land.

3 A device that collects volatile organic compounds generated from crude oil and suppresses their release into the atmosphere.

4 A system that controls and optimizes the flexibility of the shaft generator power to improve engine responsiveness. It reduces fuel consumption by increasing operational flexibility and reducing the frequency with which auxiliary equipment is required. Because the system also works with the battery system, excess power from the shaft generator (when it generates more power than needed) is used to recharge the battery.

6 Norwegian International Ship Registration System. The system allows foreign seafarers to be assigned to Norwegian-flagged vessels and to be paid at the same wage level as in their home countries and provides preferential tax treatment for seafarers.