From February 26 to March 1, the DFFAS (Designing the Future of Full Autonomous Ship) consortium* conducted a trial simulating the actual operation of a fully autonomous ship at a distance of approximately 790 kilometers between Tokyo Bay and Ise Bay.

In the trial, the container ship Suzaku was equipped with an autonomous navigation function and connected by satellite and a ground communication line to a fleet operation center that had functions such as remote maneuvering and engine-abnormality prediction to support the operation of a fully autonomous ship from shore. 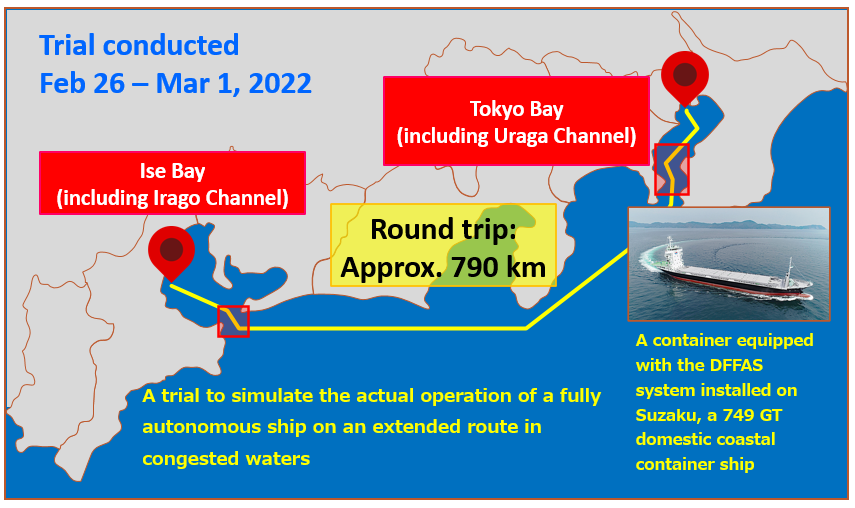 The DFFAS consortium is made up of about 60 domestic and overseas cooperating companies and organizations, including 30 companies from diverse fields. The consortium has developed its DFFAS system using an open innovation framework. In the trial, Suzaku (95 meters, 749 gross tons) navigated a 790-kilometer round-trip route departing from and returning to Tokyo Bay by way of Ise Bay using a DFFAS system, including remote operation from the fleet operation center in Chiba prefecture. This successful trial in the highly congested area of Tokyo Bay, which has roughly 500 ships passing through each day, verifies a high level of technological development that represents a significant step toward practical implementation. In addition to addressing the issues of aging crew and crew shortages facing the domestic coastal shipping industry and the social issue of accident reduction, remote operation from shore can be expected to introduce new work styles and increase labor capacity for crews. 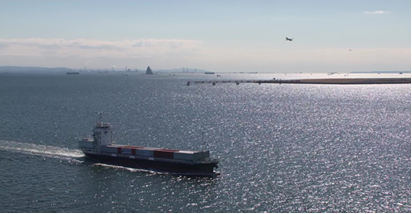 With an eye toward full-scale implementation, the DFFAS consortium developed a DFFAS system with repeated risk assessments carried out from the design stage. The system has three primary components: (1) a ship-side navigation system that controls autonomous functions from the ship; (2) a shore-side system that monitors and supports the ship from shore, including remote ship-handling functions; and (3) an information and communications system that enables stable communication between the ship and shore.

The fleet operation center marks a particular advance, allowing fully autonomous navigation at sea with tracking from shore of functions normally performed by crew, including the monitoring of weather and sea conditions, traffic flow, and the ship’s equipment. In emergency situations, the system can switch to remote operation from the fleet operation center, ensuring the overall system’s safety and stability. 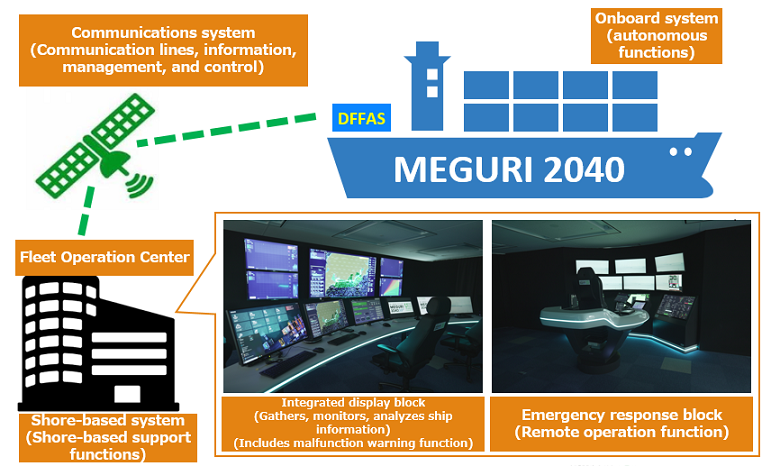 On February 3, 2021, NYK released the NYK Group ESG Story, which aims to further integrate ESG into the company’s management strategy and promotes activities that contribute to the achievement of the SDGs (Sustainable Development Goals) through business activities. To strongly promote ESG management, the NYK Group will actively develop technologies for crewed autonomous ships and fully autonomous ships and encourage new value creation as a sustainable solution provider.

** The comprehensive fully autonomous navigation system developed by the DFFAS consortium adopts a fully autonomous ship framework that is currently being developed under the name of "APExS-auto." APExS-auto is applying for approval in principle (AiP) from ClassNK and the French classification society Bureau Veritas.

Overview of Each Company