NYK and its group company NYK Business Systems (NBS) have developed and implemented a system that assists with the creation of PCTC sailing schedules, thus reducing environmental burden and improving scheduling efficiency.

Sailing schedules of NYK PCTCs are created after considering several factors, including calling port location, the number of booked units, required arrival dates, and other circumstances such as port congestion and expected weather conditions along the sailing route. However, because vessels call multiple ports to load and discharge vehicles, many manual calculations and much coordination have been required. The heavy workload of schedule coordinators and an unfixed procedure to pass on knowledge to successors have thus become long-term concerns requiring improvement. To address these issues, one of NYK’s digitalization initiatives has been to work with NBS to develop a system that assists with the creation of sailing schedules.

Overview of the System

The system works to assist schedule coordinators with the efficient determination of sailing schedules by suggesting optimized schedules that may not be realized through conventional manual calculations. The system acquires operational data on each vessel from other in-house systems such as SIMS.* Once the conditions are specified, such as calling ports and the number of loading or discharging units, the system promptly carries out hundreds of thousands of simulations that include multiple inputs — such as the most appropriate arrival time at port and most suitable navigation speed — to eventually obtain an optimized schedule that best suits each vessel navigating multiple ports.

Utilization of this system enables quicker decision-making, as well as the accumulation and succession of knowledge over a long term. In addition, this system is expected to contribute to helping NYK’s PCTC services address climate change by enabling the determination of schedules that minimize GHG (greenhouse gas) emissions from vessels. 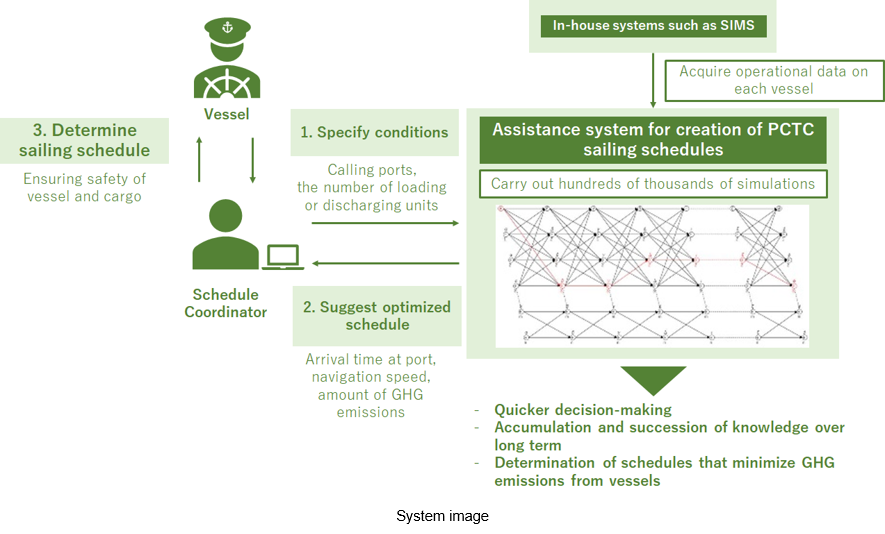 NYK aims to further enhance simulation accuracy by improving the calculation logic of the system, as well as further deepening linkage of this system with existing in-house systems. In addition, NYK will address work-style reform in the creation of sailing schedules by aggressively implementing superior technologies such as this and knowledge from outside parties. Such initiatives will also contribute to a reduction in GHG emissions from NYK-operated vessels.

Development and improvement of several operation-assistance systems are parts of software innovation to achieve NYK’s environmental target, which is to reduce CO2 emissions per transportation unit by 50% by 2050. NYK’s Sail GREEN project** is also expected to contribute.

Together with hardware innovation, such as the promotion of next-generation eco-friendly ships, NYK will aggressively promote software innovation in accordance with its ESG management strategies.

On February 3, 2021, NYK announced the NYK Group ESG Story, which aims to further integrate ESG into the company’s management strategy and promotes activities that contribute to the achievement of the SDGs (Sustainable Development Goals) through business activities. To strongly promote ESG management, the NYK Group will encourage new value creation as a sustainable solution provider through a business strategy that includes software innovation.

NYK Group ESG Story
A guideline detailing concrete efforts to integrate ESG into management strategies of the NYK Group. Details can be found in the following press release.

* SIMS (Ship Management Information System)
A system developed by the Group for timely sharing of detailed ship data — such as operation status, fuel efficiency, and plant status — between ships and land.

** Sail GREEN project
A project being promoted by NYK’s Automotive Transport Headquarters to reduce CO2 emissions at all the transportation stages of vehicles and contribute to the eco-friendly supply chains of customers. The chief component of the project is a switch to LNG-fueled PCTCs, which emit less CO2 compared to conventional heavy-fueled vessels. In addition, reducing CO2 emissions at finished-car logistics terminals that NYK operates throughout the world, as well as during short sea and inland transportation, is also an important target of this project.