Minabecho in Wakayama prefecture is where most loggerhead sea turtles** lay their eggs on the main island of Japan. This research project started in 2016 with the aim of studying the sea turtle’s behavior patterns and keeping the turtles free of danger, and over the past five years comprehensive surveys have been conducted and valuable data collected by the participants.

This year, the volunteer program was cancelled to prevent the spread of the COVID-19, but we continued our research, mainly led by the project's chief researcher, Yoshimasa Matsuzawa, chairman of the Sea Turtle Association of Japan, by attaching Argos GPS beacons to two loggerhead turtles and tracking their migration routes during spawning. The two loggerhead sea turtles have been named “Umi-chan No. 2” and “Hana-chan No. 2,” and their locations are provided on the in-house portal site along with comments by Yoshimasa Matsuzawa.

The site helps NYK Group employees deepen their interest in the marine environment.

Hana-Chan No. 2 tagged with the Argos GPS beacon

Unlike Hana-chan No. 2, Umi-chan No. 2 spawned in 2015 and 2017 in Senrihama. Based on last year's results, we focused on whether the spawning experience at Senrihama Beach had an impact on the migration path to the East China Sea. The turtles are equipped with a geomagnetic compass that enables them to move in a straight line to their destination. After leaving Senrihama, however, Hana-chan No. 2 and Umi-chan No. 2 moved from southern Tokushima to western Kochi, and from southern Oita to Miyazaki and the eastern coast of Kagoshima, before entering the East China Sea through the Osumi Strait and then reaching the Sea of Japan. Up to now, research has not shown many cases of loggerhead sea turtles entering the Sea of Japan. In recent years, the decrease in food resources in the East China Sea and the influence of global warming may have shifted the feeding area to the north, so it is necessary to keep a close eye on this area in the future. On the other hand, the pattern of migration along the shore has also been limited in past tracking studies. The causes of this are not yet understood. However, in view of the increased risk of deaths resulting from capture by coastal fisheries, it is a very important topic.

The number of loggerhead turtles laying eggs in Japan is declining now. In Senrihama, 350 spawnings were confirmed 30 years ago, but this year the count was only 63. This project will contribute to the conservation of this species by investigating where and how threatened the loggerhead turtles are after spawning. 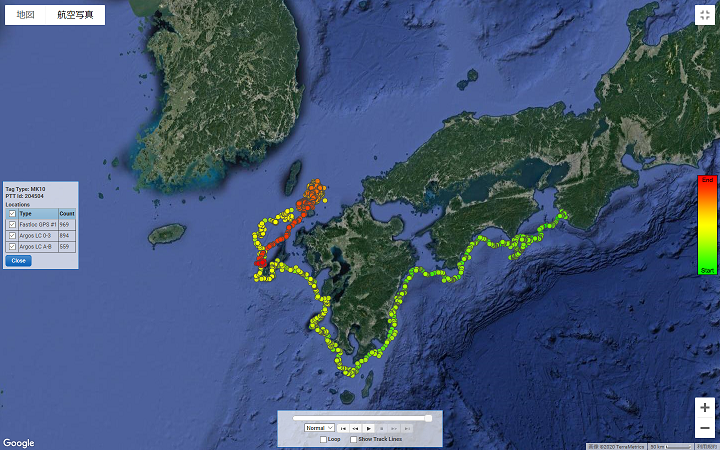 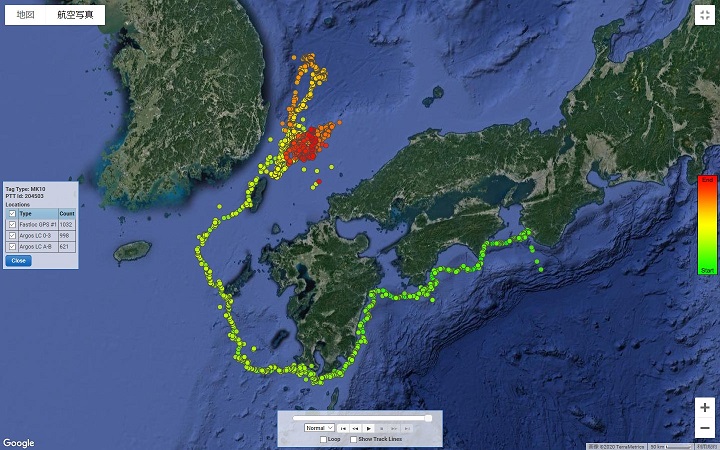 NYK, as a good corporate citizen that recognizes environmental issues as a significant company challenge, participates in projects such as this to contribute to the achievement of better seas through preservation of the marine environment and biodiversity, which are closely related to our business.

* Earthwatch Japan
Earthwatch, a non-profit organization established in 1971 in Boston, is an international nongovernmental organization. It provides researchers with both human and financial support for overseas field research and surveys. Volunteers dispatched all over the world by Earthwatch have taken active roles at cutting-edge scientific sites, receiving instruction from world-class scientists. Earthwatch Institute - Japan was established in 1993 for the purpose of promoting Earthwatch activities in Japan.
https://www.earthwatch.org

※This research program provides participants with intensive learning opportunities about changes to the environment and animal life, encourages action for sustainability, and contributes to the below Sustainable Development Goals.