The following is an excerpt from the New Year’s speech made by NYK president Tadaaki Naito as business opened for 2019 at the company’s head office in Tokyo.

- Excerpt from the speech

I would like to wish everyone a happy new year. The Heisei period* will come to a close this year, and Japan will welcome a new era. I would thus like to take this opportunity to look back on the past 30 years and look forward to the next 30.
(*The current Japanese era began in 1989 and will come to an end in April 2019.) 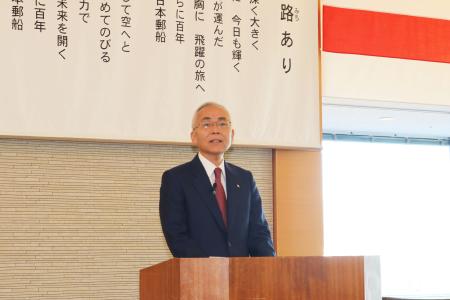 The year is 1989. This is the year in which the Berlin Wall fell and the Cold War between the East and West ended. Following this, actions towards regional economic integration were successively taken and global trade started to expand. In 1986, the NYK Group announced its 21st century management vision “NYK21,” and in step with the growing global trade, the group worked to expand comprehensive logistics and diversify the business. Starting with the founding of NYK Line (Europe) Ltd. in 1989, in addition to establishing a number of other local companies around the world, logistics centers were opened in various locations, including Los Angeles. The company expanded into the passenger ship business in 1990.
When looking at the consolidated financial results in FY2017 compared to 1989, revenues have increased 3.4 times, capital adequacy has increased 2.5 times, the number of consolidated companies has increased 13 times, and the number of employees has increased 4 times. This is rapid growth, and it indicates the company has globalized, diversified, and expanded its business.

The United Nations has predicted that the global population of 7.6 billion people in 2017 will grow to 9.8 billion in 2050. Much of this growth will be in Asia and Africa, and within these regions, India is expected to see a population growth of 300 million people and overtake China as the world’s most populous country. The climate is also expected to change. According to the Fifth Assessment Report issued by the UN IPCC (Intergovernmental Panel on Climate Change), in the neutral case prediction, temperatures are expected to rise by 1-2 degrees in 2050 compared to 1996. As a result, abnormal weather events will occur around the world, and the ocean environment, including Arctic ice and coral reefs, will be negatively affected, and the impact on agriculture will be unavoidable. Great strides have also been made in the fields of IT and biotechnology, and although it is not possible to show in numerical figures, those fields have the power to change how we live. In 30 years, it is possible we will live in a world that is hard to imagine today.

When thinking about the next 30 years, which are not a clear picture, I feel we will need to significantly change the current way of being at the NYK Group. It will be important to flexibly respond to the changes in the business environment and society, as well as be aware of further promoting diversification, such as the advancement of women and global personnel in order to achieve this. Logistics will remain our main business, but we will not needlessly pursue greater scale. Rather, we need to focus on the peripheral areas and software business and turn our eyes towards developing niche operations.

As we think about the next 30 years, I would like to talk from the perspective of what direction the NYK Group should take in 2019. 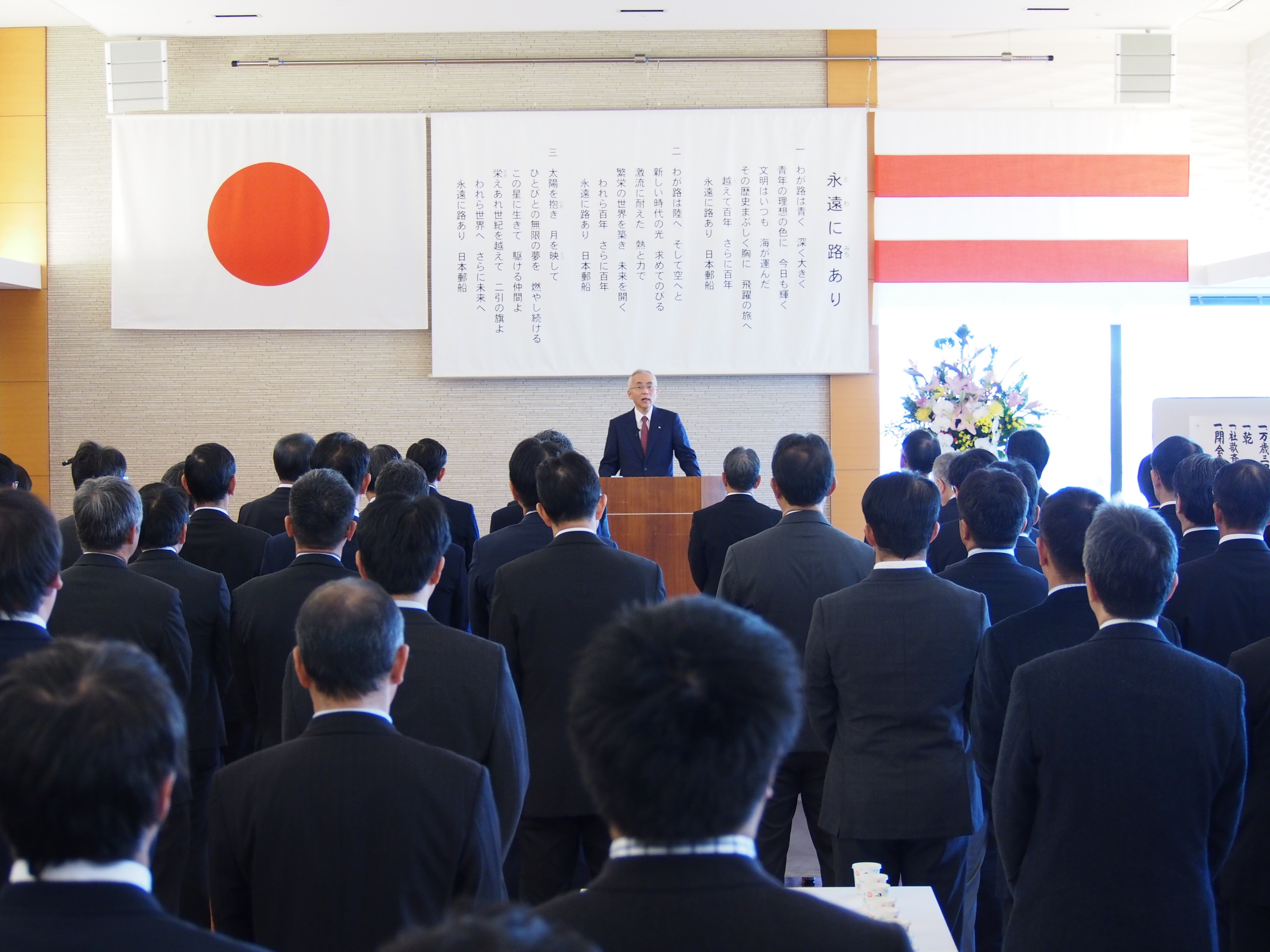 Under the first step of “Optimizing the business portfolio,” the fundamental revision of the dry bulk business and success of the integrated container shipping line ONE have been set forth as the two key elements. In the dry bulk business, through the hard work of everyone involved and a favorable shift in the market situation, the business is showing steady improvement. On the other hand, ONE was unfortunately forced to significantly lower its business forecast in October of last year. A number of initiatives to improve the situation have been taken, and I want the company to link these initiatives to recovering trust within the market.

Next, under the second step of “securing stable-freight-rate businesses,” strengthening the logistics business, the car carrier / auto logistics business, and the LNG/offshore business has been set forth. In the logistics business, Yusen Logistics is advancing the initiatives aimed at achieving success and growth as a core part of the NYK Group.
In auto logistics, the decision has been made to build a dedicated finished car logistics terminal and establish a company that specializes in shipping finished cars by rail. In the LNG/offshore business, a stable-freight business has steadily been secured by concluding new time charters for LNG carriers and shuttle tankers with customers in Japan and overseas. Going forward, I want those involved to continue working to establish a stable revenue structure with a focus on these growth-promoting businesses and the priority investment domains.

Under the last step of “increasing efficiency and creating new value,” “Digitalization and Green” initiatives, the subtitle of the medium-term management plan, have been set forth. 2018 was a year in which advances were made in connecting our technology to business opportunities, such as the development of diagnostic software for the engine combustion chamber and a water-content alarm for the fuel oil in order to prevent mechanical failures. We had the first major updates in 25 years to the vessel safety management system. Consideration is being given to the commercialization of an onboard cashless system. Also, in May of last year, we were the first company in the ocean shipping industry to issue green bonds, which narrow down the use of the funds to projects that benefit the environment. I believe it was an opportunity for all stakeholders to recognize our stance towards the environment. Also, the environmental concept ship NYK Super Eco Ship 2050 announced in November brings together our knowledge and insights, and embodies our dream at the same time. While developing the environmental technology adopted by this ship and continuing to strive for actual applications on board the ships, we will aim to sustainably create corporate value and social value.

We should also recognize that our “Digitalization and Green” initiatives contribute to the SDGs (Sustainable Development Goals) promoted by the United Nations, the Federation of Economic Organizations, etc. Let’s walk half a step ahead while remaining highly motivated.

In response to the items identified through the emergency inspections conducted at the group companies, we are utilizing expert advice as necessary and taking corrective measures primarily at the related divisions. Also, in order to focus on strengthening the governance framework, a Governance Support Group was established on January 1 of this year. We will fully utilize this organization and work to rebuild the framework. In order to obtain the trust of our stakeholders, it is vital that we establish a stronger, more effective groupwide framework. Based on a firm belief that governance is the foundation of all business activities, let’s take the next step forward.

The history of the NYK Group has been created through the adoption of the group values of “integrity, innovation, and intensity,” which have been fostered by group employees over the years. Taking these group values to heart, let’s open the door to the new era.