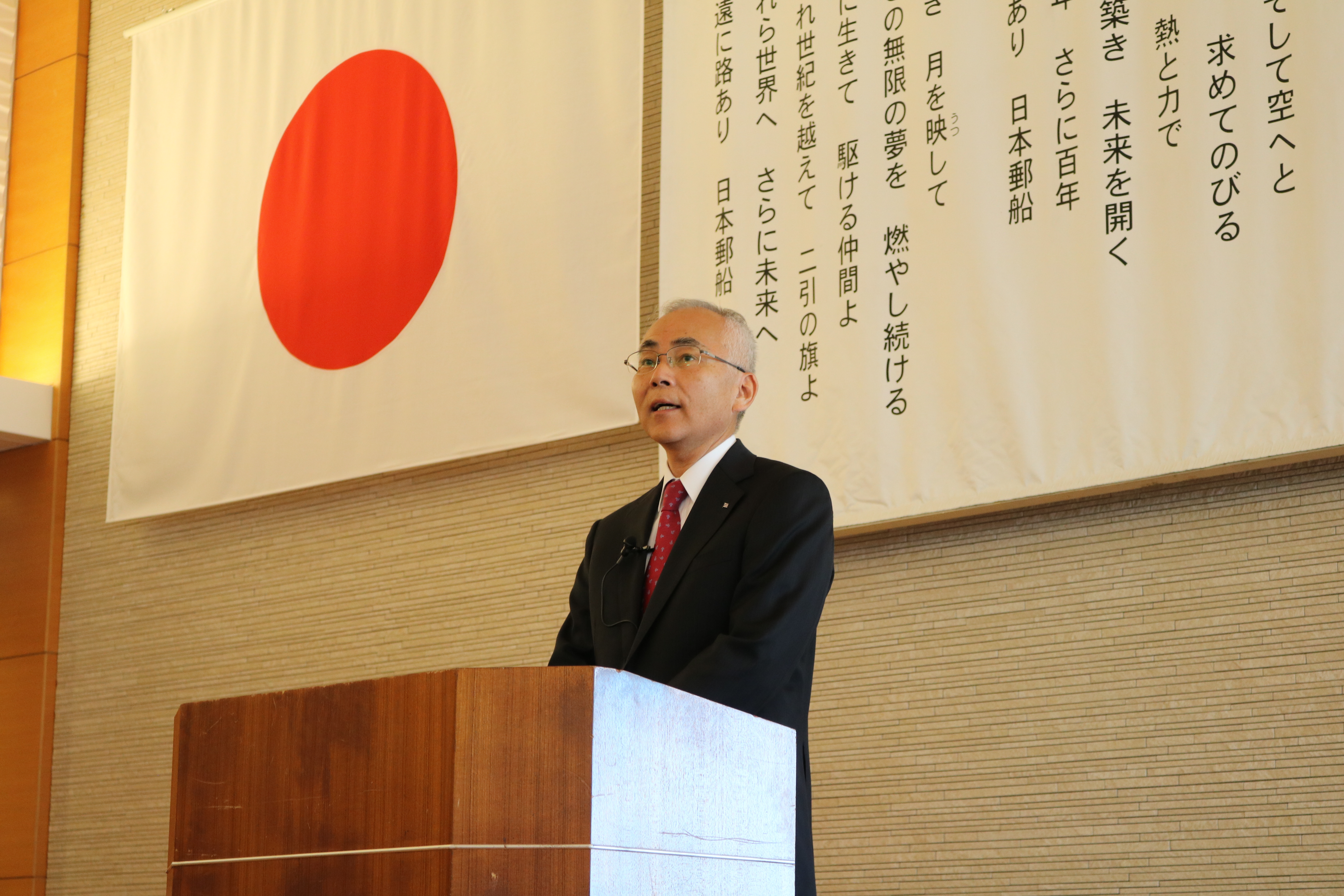 NYK president Tadaaki Naito marked the 133rd anniversary of NYK’s founding by addressing company employees at the NYK head office in Tokyo on October 2. A summary of his speech is provided below.

Medium-term Management Plan
Our group announced its medium-term management plan “Staying Ahead 2022 with Digitalization and Green” in March. The plan indicates that we will conduct portfolio management that flexibly revises the businesses operated by the group. In fact, the plan clearly states that we will liquefy assets in order to obtain the capital necessary to develop and transform our businesses. And to carry this out, we need to revise the entire group.
To rephrase, we have reached a point where we have to use the internal reserves accumulated by our predecessors since the founding of the company to create a future for the group, and I am aware that how to best use these precious limited management resources is an extremely important issue.

We will also actively work to forge ahead with “Digitalization and Green” initiatives, which will most definitely advance forward despite the “opaque world.” Technological progress is rapidly occurring, and it goes without saying that digital technology in particular is advancing by leaps and bounds. There is a need to utilize digital technology to streamline business management and reduce costs, and as a means to flexibly respond to changing customer needs. Our “Green” initiatives, which seek to reduce the burden on the environment, have three objectives. First is 100% compliance with stricter environmental regulations. Second is energy conservation. And third is the discovery of new business opportunities stemming from the changing environment.

By working proactively instead of reactively, we must create a corporate structure that enables us to respond to the inevitable shift to a “green society.” I ask all of you to watch with a keen eye to identify the hints around you of how to best respond to the environment. 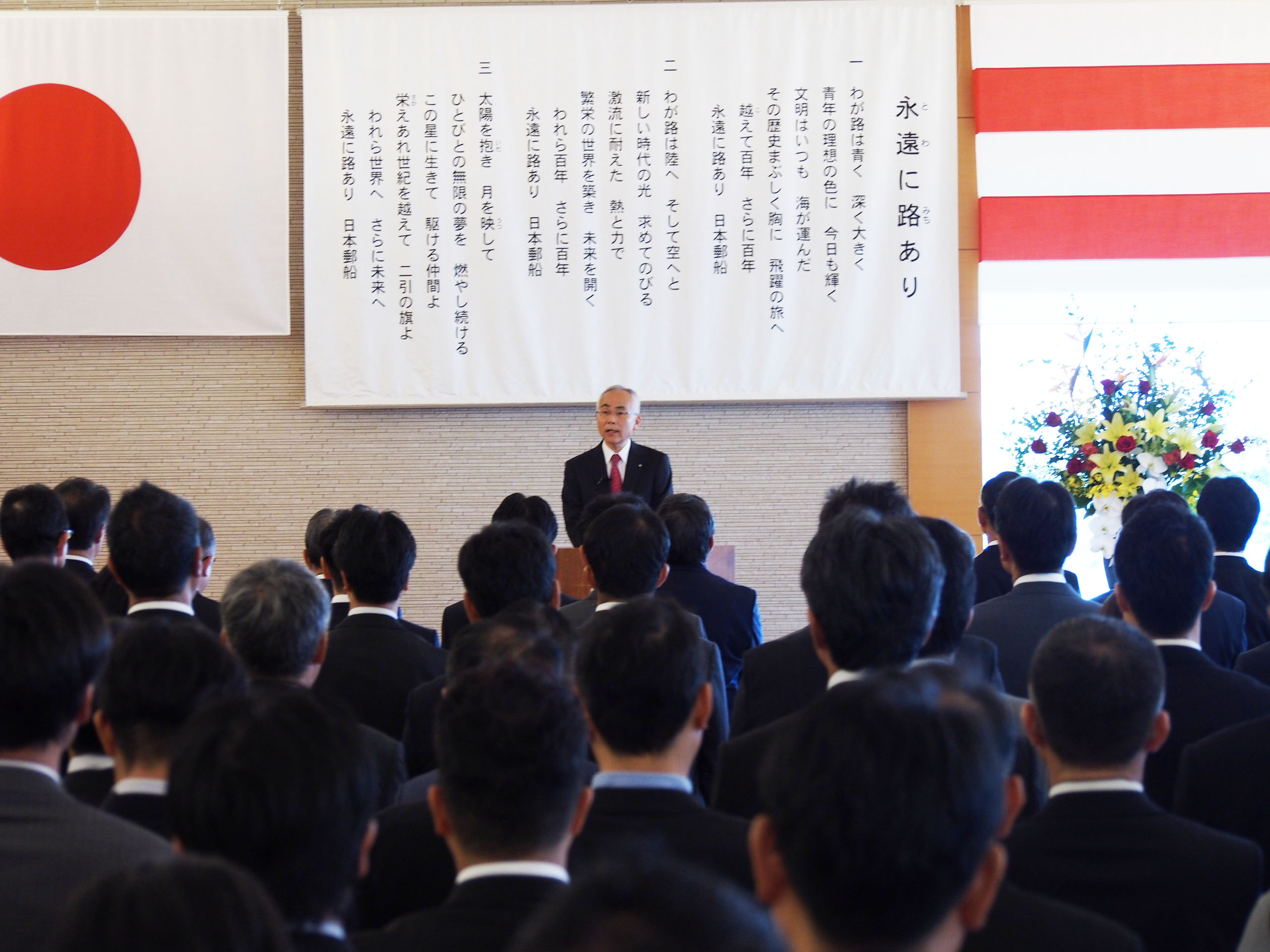 Reestablishing Group Governance
Reestablishing group governance is one of the most important challenges facing the group. In October 2016, Nippon Cargo Airlines received a warning from Japan’s Ministry of Land, Infrastructure, Transport and Tourism regarding deficient aircraft maintenance. The problem unfortunately repeated, and in July this year the ministry issued an administrative penalty. This was an extremely regrettable occurrence. It was thought that our compliance activities for antitrust and other laws were effectively being conducted companywide, and an awareness of legal compliance had been firmly established, but we learned that various other forces were at work on the gemba level. We were unable to keep pace with the changing times and increasing demands from society to ensure legal compliance, and I greatly regret that effective measures were not appropriately taken.

In order to carry on executing the management strategy while responding to societal demands, it is important for groupwide governance to be functioning properly. Based on the awareness that maintaining social trust is an absolute requirement, I intend to reestablish reputable group governance.

Creating New Value
In the “opaque world” I mentioned earlier, we have reached the limits of the traditional business model. However, our group’s long history, we have faced numerous crises and difficulties and have continued to grow by adapting to new environments. For example, when Japanese car exports skyrocketed and there were limitations to transport using traditional cargo ships, we quickly grasped customers’ needs and began to operate car carriers, which enable rapid loading while reducing damage resulting from cargo operations. As one way to reduce damage to finished cars, which occasionally occurs during transport, we were the first company to propose counterclockwise loading. This initiative was highly regarded by customers and led to the expansion and development of our car carrier business.

I feel that our group is currently facing a situation more challenging than anything it has faced in the past. If we continue to rely on outside forces under the belief that we will be OK continuing the current business as long as the market recovers, I feel the company will not survive.

We will only be able to create a new era by questioning what we currently believe to be true, working from various perspectives to differentiate our service compared to competitors, and tenaciously executing the business. Now is our time to change a crisis into an opportunity.
Let’s continue to stay half a step ahead by realizing creative innovations and working together to create new value.
The news on this website is as of the date announced and may change without notice.