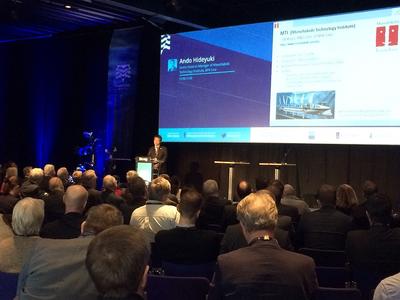 During the presentation
NYK group was invited to the “National Maritime Summit” held in Haugesund, Norway this February, and Hideyuki Ando, senior general manager of the Monohakobi Technology Institute (MTI), a consolidated subsidiary company of NYK, delivered a presentation about NYK Group’s initiatives of using IT in vessel operations.
In his presentation titled “Digitalization in Shipping – the future as seen by Nippon Yusen Kaisha (NYK)”, Ando introduced the future prospects of using Digital Twin* in vessels, and NYK’s achievements of using Big Data for optimization of route plans, vessel allocation plans, and hull modifications. He also introduced other R&D projects conducted by NYK group companies, which were selected as supporting projects by Japan’s Ministry of Land, Infrastructure, Transport and Tourism (MLIT) such as; the study on collision risk assessment and autonomous operation of vessels, condition monitoring of vessel engine plant, and measurement techniques for hull structure strength. Ando referred to possibilities of further collaborations between NYK group companies and the maritime industry in Norway where R&D are proactively promoted. 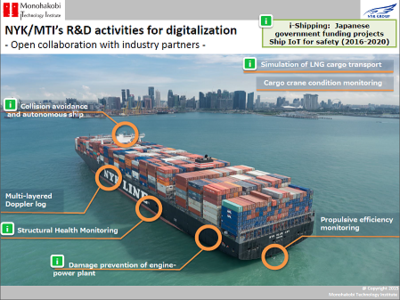 This National Maritime Summit is annually held in Haugesund where the Norwegian Maritime Authority is based. Monica Mæland, a Minister of Trade and Industry, and Ketil Solvik-Olsen, a Minister of Transport and Communications of Norway attended and gave a speech in this 24th year.
To enhance the safety and operational efficiency of NYK fleet, and to strengthen global competitiveness, NYK Group will continue to proactively promote R&D, in cooperation with its global partners.
*Digital Twin
To realize the physical conditions of individual plants and products in operations, through use of Big Data enabled by IoT and engineering simulation technologies.
<Related press release>
“NYK and MTI Participating Projects Selected as Support Projects for R&D in Advanced Safety Technology of Vessels by MLIT,” July 6, 2016
http://www.nyk.com/english/release/4208/004366.html