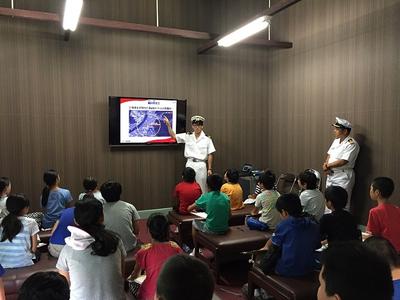 On August 17 and 20, a shipyard tour was held at the Kure Shipyard (Kure, Hiroshima prefecture) of Japan Marine United Corporation (JMU) for teachers and students from elementary schools in Kure. During the tour, NYK crew members gave a presentation on maritime transport, focusing on vessel operations. The presentation was conducted in cooperation with the Japanese Shipowners’ Association, a general incorporated association.
The tour was organized by JMU as part of a company program for the public to recognize Marine Day, a national holiday in Japan celebrated on the third Monday of July. Three NYK crew members — a captain, chief engineer, and navigating officer —explained the kinds of cargo the ship under construction will carry and the services it will provide. The staff also explained that vessels such as very large containerships, crude oil tankers, and other specialized vessels have important roles and responsibilities in mass transportation in Japan, a country surrounded by seas and oceans. The presentation was conducted using photos and anecdotes on navigation to stimulate participants’ understanding.
The shipyard tour was a good opportunity for participants to become familiar with and gain a greater awareness of maritime affairs and seafaring life, which is related to the NYK Mirai Project.*
NYK will continue its efforts to familiarize people with and develop interest in oceangoing vessels and the maritime industry.
Outline of Shipyard Tours
Dates: August 17 (Wednesday) and 20 (Saturday), 2016
Organizer: Japan Marine United Corporation
Collaborator: The Japanese Shipowners’ Association, a general incorporated association
Participants: Teachers (social studies) and fifth grade elementary school children in Kure; a total of 140 participants
Venue: Kure Shipyard, Japan Marine United Corporation
* NYK Mirai Project
Started at the end of 2014, the project is a series of activities to help the young generation, who shoulder the future of Japan, become familiar with and gain greater awareness of maritime affairs and the seafaring life, as well as the marine industry, with an aim to increase the number of young people who choose seafaring careers.
The news on this website is as of the date announced and may change without notice.