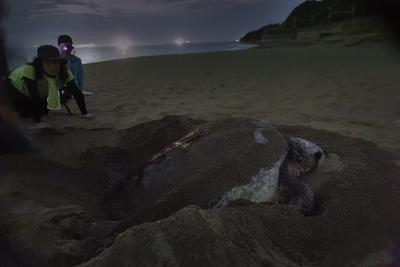 NYK has supported “Kishu Minabe Sea Turtle Research Project” * launched by the authorized NPO EarthWatch Japan**. Seventeen NYK group employees volunteered to participate in the research which was conducted in July of this year.
Minabecho in Wakayama prefecture is the largest place in the main island of Japan where loggerhead sea turtles*** lay their eggs, but now sea turtles are in danger of dying out. Research of the sea turtle’s lifestyle has been undertaken since the year of 1990 in Minabecho. 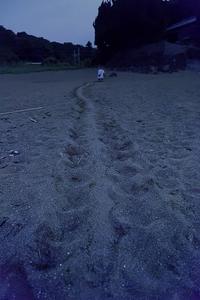 This program was held twice this year where participants attached identification tags to the turtles, recorded and measured their shell length and width using a caliper. The measurement and tagging activity is accomplished as the turtles cross the sandy beach to nest at nighttime. This research was under the careful guidance of an academic expert and members of Sea Turtle Association of Japan, a local NPO in a manner so as not to disturb their spawning behavior.
NYK, as a good corporate citizen, recognizing environmental issues as a significant company challenge, will contribute to the achievement of a better sea through preservation of marine environment and biodiversity which have close relationship with our business. 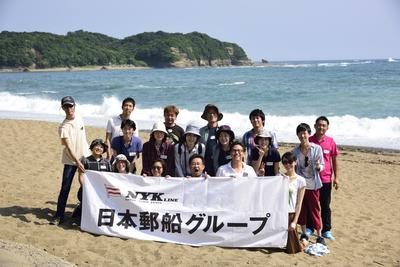 *Kishu Minabe Sea Turtle Research Project
Senri, Iwashiro, Takahama beach in Minabecho, Wakayama prefecture where the loggerhead sea turtles come ashore for nesting every year, but sufficient identification surveys could not be conducted due to lack of staff. With comprehensive surveys and valuable data accomplished by responsible citizen volunteers the program objective can be met. This project’s objectives are to study the sea turtle’s lifestyle, and protect their habitat with the goal to protect and preserve sea turtles who are on the IUCN**** Red List of Threatened Species. The research sessions this year occurred on July10-12 and 14-16.
**EarthWatch Japan
Earthwatch, a non-profit organization established in 1971 in Boston, is an international nongovernmental organization. It provides researchers with both human and financial support for overseas field research and surveys. Volunteers dispatched all over the world by Earthwatch have taken active roles at cutting-edge scientific sites, receiving instruction from world-class scientists. Earthwatch Institute - Japan was established in 1993 for the purpose of promoting Earthwatch activities in Japan. In 2003, it was certified as a non-profit organization.
https://www.earthwatch.org
***Loggerhead sea turtle
Loggerhead sea turtle is listed on the IUCN Red List of Threatened Species due to shore development, encroachment and fishing net.
****IUCN
International Union for Conservation of Nature. IUCN is a global nature conservation network created by government and civil society organizations in 1948, to forge and implement solutions to environmental challenges.
The news on this website is as of the date announced and may change without notice.