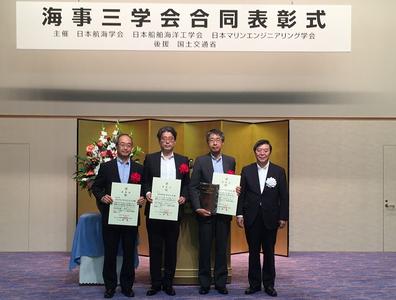 From left; Shota Inoue, senior managing director of Wing Maritime Service Corporation Koji Shinozaki, general manager of NYK's Fuel Group Tsutomu Shoji, president of Keihin Dock Co. Ltd.
Japan's first LNG-fueled ship, Sakigake, which is a tugboat owned by NYK has been recognized with a Technology Special Award at the 2015 Ship of the Year Awards sponsored by the Japan Society of Naval Architects and Ocean Engineers (JASNAOE). An awards ceremony was held on July 7 at the Kaiun Club in Tokyo.
This is the 26th year that JASNAOE has recognized the most technically advanced, well-designed, and socially conscious vessels built in Japan, and Sakigake was noted by manufacturers and related organizations for the tugboat’s environmental performance, design, and technological developments.
And this is not the first time for the NYK Group to be honored. The group’s cruise ship Crystal Harmony, which has since been refurbished and rebranded as Asuka II, was recognized as ”Ship of the Year" in 1990. NYK-Hinode Line Ltd.’s two module carriers Yamatai and Yamato were given special awards in 2010. And the NYK-owned coal carrier Soyo was selected as "Ship of the Year" in 2013.

The NYK-owned Sakigake is equipped with dual-fuel engines that can use not only diesel oil but also LNG. Compared with conventional tugboats that use marine diesel oil, Sakigake emits about 30 percent less carbon dioxide, 80 percent less nitrogen oxide, and absolutely no sulfur oxide when using LNG as fuel.
Sakigake was built* by Keihin Dock Co. Ltd. (head office: Yokohama) and delivered in August 2015. The tug has been chartered to Wing Maritime Service Corporation (head office: Yokohama) from NYK and operated mainly at the ports of Yokohama and Kawasaki.
In accordance with the NYK Group’s “More Than Shipping 2018” medium-term management plan, NYK has been implementing a number of creative solutions, such as the construction of the world’s first LNG-fueled car carrier and LNG bunkering vessel. NYK will contribute to the continuing promotion and development of LNG fuel for ships for reduced environmental loads.
* The project to build Sakigake received subsidies from Japan’s Ministry of Economy, Trade and Industry and the Ministry of Land, Infrastructure and Transport, which support projects promising energy-saving logistics and innovative maritime transport improvements. Nippon Kaiji Kyokai also provided joint research support.
• Related NYK press releases

“NYK Participating in Feasibility Study for LNG Bunkering in Yokohama,” June 15, 2016,
https://www.nyk.com/english/release/4208/004345.html
“Japan's First LNG-fueled Tugboat Garners Recognition for NYK at 17th Annual Logistics Environment Awards,” July 11, 2016,
https://www.nyk.com/english/release/4208/004370.html
The news on this website is as of the date announced and may change without notice.