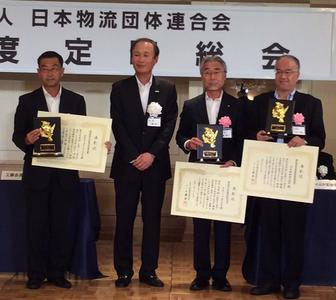 From left; Yutaka Miyaji, director of Wing Maritime Service Corporation Yasumi Kudo, chairman of JFFI Katsuhisa Watanabe, general manager of Ship Design Department at Keihin Dock Co. Ltd. Tomoo Kitayama, general manager of NYK's Environment Group
NYK, Wing Maritime Service Corporation (head office: Yokohama; president: Toshinori Yamashita), and Keihin Dock Co. Ltd. (head office: Yokohama; president: Tsutomu Shoji) have jointly received the Technological Development Award at the 17th annual Logistics Environment Awards* sponsored by the Japan Federation of Freight Industries (JFFI). The award recognized the environmental load reduction achieved by Japan's first LNG-fueled tugboat, Sakigake. This is the third time since 2009 that NYK has been honored at this annual awards ceremony.
NYK has been conducting technical research and development on the use of LNG to fuel ships in order to meet the tightened regulations on CO2 emissions** from vessels. Sakigake, which was delivered in August 2015 and comes equipped with dual-fuel engines that can use either LNG or diesel oil, was highly evaluated by the JFFI because LNG fuel has much less of an environmental impact compared with heavy fuel oil.***
In accordance with the NYK Group’s “More Than Shipping 2018” medium-term management plan, NYK has been implementing a number of creative solutions, such as the construction of the world’s first LNG-fueled car carrier and LNG bunkering vessel. NYK has also teamed with Engie and the Mitsubishi Corporation to develop the LNG bunkering business, and will contribute to the continuing promotion and development of LNG fuel for ships for reduced environmental loads.
* Logistics Environment Awards
Organizations, corporations, and individuals are recognized by JFFI (chairman: Yasumi Kudo) for efforts to protect the environment and enhance environmental awareness in the sphere of logistics and thereby contribute to the sound development of logistics. These awards were founded in 2000 and are presented annually.
** Tightened Regulations on CO2 Emissions
The requirements applicable to ships for controlling sulfur oxides (SOx), nitrogen oxides (NOx), and carbon dioxide (CO2) emissions are becoming stricter every year. In particular, regulations aimed at reducing SOx emissions by vessels are becoming ever more stringent. Applicable emission limits were reduced from 1.0% to 0.1% in 2015 in certain emission control areas, or ECAs (the North Sea, the Baltic Sea area, and areas around North America). Outside the ECAs, emission limits will be reduced from the current limit of 3.5% to 0.5% in 2020 or 2025.
*** Environmental Impact of LNG Fuel
Use of LNG almost completely eliminates SOx and particulate matter (PM) emissions, and the operation of LNG-fueled vessels can result in a reduction of nearly all SOx and PM emissions compared to emissions by vessels powered with conventional heavy fuel oil. Use of LNG can also reduce CO2 emissions by approximately 30% and can reduce NOx emissions by up to 80%. The widespread adoption of LNG is thus considered to be an influential measure by ships to control greenhouse gas emissions.
• Related NYK press releases

“NYK Receives Delivery of Japan's First LNG-fueled Vessel,” September 15, 2015,
https://www.nyk.com/english/release/3710/004066.html
“NYK Participating in Feasibility Study for LNG Bunkering in Yokohama,” June 15, 2016,
https://www.nyk.com/english/release/4208/004345.html
The news on this website is as of the date announced and may change without notice.