Hikawa Maru to Be Designated as Important Cultural Property

On March 11, Japan’s Council for Cultural Affairs submitted a report to the nation’s Minister of Education, Culture, Sports, Science and Technology recommending that the moored museum ship Hikawa Maru be designated as an Important Cultural Property. Hikawa Maru will be the first transoceanic liner to receive this designation.
In the report, Hikawa Maru was highly evaluated for the following points:
- The role the ship has played in Japan’s society and economy
Cargo-passenger ships were the primary means of international transport for the first half of the 20th century, and during those years Hikawa Maru provided a service between Japan and Seattle, the main route of that time. In World War II, the ship served as a hospital ship, and after the war concluded Hikawa Maru was used to transport demobilized soldiers and repatriated citizens.
- The value of the ship to shipbuilding and industrial art

When the ship was completed in 1930, its very large diesel engine was the most advanced of its time. In addition, the ship’s beautifully designed interior was the first import of Art Deco architecture to Japan.
On April 23, an event to celebrate the ship’s 86th “birthday” is scheduled to take place on board. Admission will be free in commemoration of the ship’s upcoming designation as an Important Cultural Property. For detailed information, please visit the ship’s website. (https://www.nyk.com/rekishi/e/)
NYK will continue its efforts to stimulate interest in the maritime industry and its ships by providing current and future generations with a link to Japan’s maritime history. 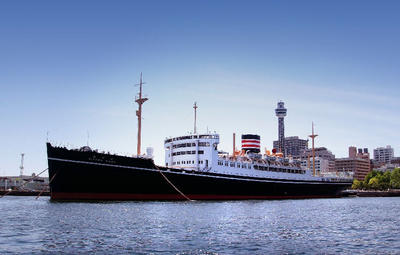