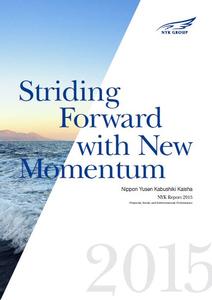 The 2015 NYK Report has been recognized with an Award for Excellence* at the 18th Nikkei Annual Report Awards. This is the third consecutive year that NYK has received this recognition.**
Sponsored by Nikkei Inc. and founded in 1998 for the purpose of improving the quality of annual reports, the Nikkei Annual Report Awards annually recognizes excellent annual reports. In 2015, a total of 71 companies applied for this award, and active fund managers and analysts carefully evaluated the submissions based on 10 wide-ranging criteria.
The 2015 NYK Report begins with new NYK president Tadaaki Naito encouraging a bold and sound approach to attain the goals of the “More Than Shipping 2018” medium-term management plan. In the body of the report, value-enhancement processes by the NYK Group are presented, focusing on business models and the NYK Group’s value and strengths, such as human capital development, environmental initiatives, and safety activities. The NYK Group’s CSR activities are also presented as an important part of the group’s differentiation.
The awards ceremony will be held in Tokyo on February 22.
NYK finds this award encouraging and will continue its efforts to disclose relevant information and data that benefits NYK’s stakeholders.
The report can be accessed through the link below.
https://www.nyk.com/english/ir/library/nyk/
* A grand prize is presented to one company, a runner-up prize to four companies, an award for excellence to 13 companies, a special award to two companies, and an award for encouragement to two companies.