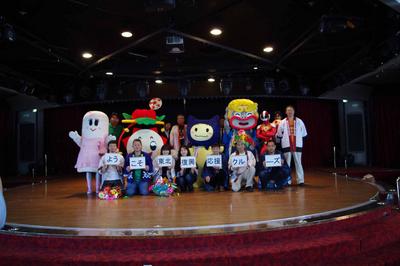 Mascots in Tohoku welcome the passengers

From November 7 to 9, an extremely unique cruise experience was held on NYK’s Japan-based luxury cruise ship to support reconstruction of the area damaged by the Great East Japan Earthquake and ensuing tsunami.

The two-night, three-day cruise on Asuka II (50,142 tons; 800-guest capacity; about 470 crew) set sail from Yokohama on November 7, and on the ocean north to Sendai, the 750 guests were treated to a number of activities to allow them to learn more about Tohoku, the northeast area of Japan mostly affected by the March 11, 2011 tragedy. Those on board partook of meals and drinks made using local ingredients, were given the opportunity to make local Tohoku handcrafts, screened a movie filmed in the area, and were even treated to a live concert by actor-singer Masatoshi Nakamura, a Tohoku native. 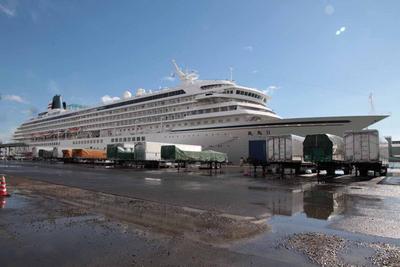 Asuka II at the port of Sendai

Upon arriving on November 8, guests toured the nearby culturally and historically notable areas of Hiraizumi and Matsushima. And before embarking on the return voyage home the next day, passengers took time to visit the surrounding areas of Ishinomaki and Sendai.

At the port, 72 sixth-grade children from Kama Elementary School in Ishinomaki were invited on board for a tour of the luxury ship, and as NYK chairman Koji Miyahara and Masatoshi Nakamura looked on, the captain taught the children how to tie a few knots common to the seafaring life.
A portion of each passenger’s fare will be donated to a trust overseen by the Japan Philanthropic Association* and then contributed to Earthwatch Japan’s** Post Tsunami Monitoring Project, which is conducting scientific research in Tohoku to foster the recovery of the area’s ecosystem. A donation box was also placed on the ship during this cruise to encourage additional contributions. 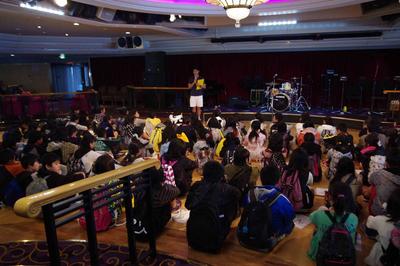 Schoolchildren on board Asuka II

Since this tragic event, NYK has supported reconstruction efforts through the free transport of relief supplies and by organizing and sending teams of employee volunteers to the area. NYK will continue its efforts to be proactively involved in social contribution activities as a good corporate citizen for the betterment of the world that we inhabit. 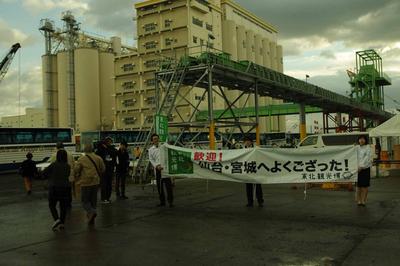 A warm welcome at the port of Sendai

An association that has been active since 1991 promoting social contribution activities that allow corporations to fulfill their responsibilities to society.

** Earthwatch Institute - Japan
Earthwatch, a non-profit organization established in 1971 in Boston, is one of the world's largest international nongovernmental organizations. It provides researchers with both human and financial support for overseas field research and surveys. Volunteers dispatched all over the world by Earthwatch have taken active roles at cutting-edge scientific sites, receiving instruction from world-class scientists. Earthwatch Institute - Japan was established in 1993 for the purpose of promoting Earthwatch activities in Asia. In 2003, it was certified as a nonprofit organization.
http://www.earthwatch.org
The news on this website is as of the date announced and may change without notice.