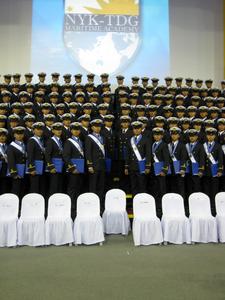 The NYK-TDG Maritime Academy (NTMA) held a graduation ceremony on September 24, 2012 for the second group of 118 students enrolled at the academy in Canlubang, Calamba City, in the suburbs of Manila. Enrolled in 2008, the second group of students completed three years of basic classes and training courses using operational simulators and an engine plant, and also they received one year of training on board NYK training vessels.

The graduation ceremony was attended by invited guests including Jejomar C. Binay, the Filipino vice president, and Toshinao Urabe, the Japanese ambassador to the Philippines, along with NYK President Yasumi Kudo and TDG Chairman J. Roberto C. Delgado. 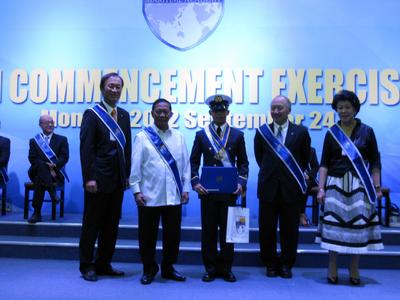 In his commencement address, Mr. Kudo encouraged the students by saying: “The NYK Group has initiated strategies to foster high-caliber seafarers who will become the core for safe navigation and to differentiate NYK Group services by utilizing their technical capabilities. I believe that you will play an active role as the central core. You will continuously improve your skills at the training facilities to be constructed adjacent to NTMA. By experiencing ship-management operations starting in Manila, you will also develop an extensive career as maritime technologists in the NYK Group. The most important thing is each “human ability”. I expect that you will be always aware of safety and security based on the corporate values of the NYK Group, namely: “integrity,” “Innovation,” and “intensity” and contribute to high-quality ocean transport.”

In addition to the NYK Group’s expertise accumulated in Japan in fostering seafarers, NTMA has created its own program to enhance basic academic abilities in accordance with the situation in the Philippines, and aims to cultivate qualified maritime officers.
At the nationwide Maritime School Assessment Program (MSAP) examination held for students attending merchant vessel seamanship schools in the Philippines, most of the second group of students to graduate NTMA were at the top of the class in academic performance. The students are now taking the ship officer examination, and all the examinees so far have acquired seafarer certificates of competency. After obtaining the certificate, each seafarer will begin a career as a third officer or third engineer on an NYK ship and will aim at becoming a captain or a chief engineer after completing the NYK Group human resource development program.
Before the ceremony, attendees visited the construction sites of the new academy facilities as well as NYK’s new crew training facilities adjacent to the academy in the presence of Mr. Kudo and Mr. Delgado. The new facilities will be completed in 2013, enabling NYK to further improve both quality and quantity of Filipino seafarers as future core officers for the NYK Group.
Outline of NYK-TDG Maritime Academy (NTMA)
NTMA is jointly run by NYK and business partner Transnational Diversified Group (TDG).
Established: June 3, 2007
Size: Number of students: 120 per academic year; Marine navigation (60), Marine Engineering (60); Instructors: about 40, including part-time instructors
(From 2013, the number of students will change to 180 per academic year, Marine navigation (90), Marine Engineering (90))
Location: Calamba City in the suburbs of Manila (about one-hour drive from Manila)
Curriculum: Four years (three years for academic lessons and one year for onboard training)
Mission: To provide higher education to foster global seafarers, focusing on building an individual’s sense of humanity and the acquirement of practical maritime technologies.
*Transnational Diversified Group (TDG)
A business group established by Chairman J. Roberto C. Delgado. Business activities include vessel agent services, seafarer manning, training and cadet education, as well as other logistics businesses. TDG and NYK have maintained a cooperative relationship since the establishment of TDG in 1976.
The news on this website is as of the date announced and may change without notice.