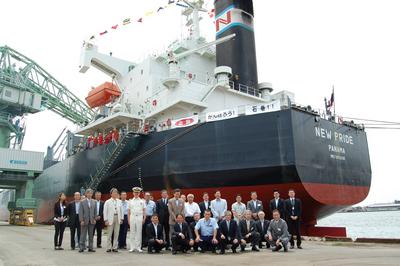 (In front of the vessel, New Pride)
Forth from left in front row:
Mr. Hiroshi Kameyama, the mayor of Ishinomaki

NYK Global Bulk Corporation (headquarters: Chiyoda-ku, Tokyo; President: Takashi Abe), an NYK Group company, held a get-together on board its 58,000-ton bulk carrier New Pride with guests from the Ishinomaki area in Miyagi prefecture to celebrate the installation of a new mechanical unloader (cargo handling machinery) at the port’s No. 7 Hiyori wharf and to pray for the further recovery and development of the port.

Two of the port’s three unloaders toppled into the sea during the Great East Japan Earthquake and ensuing tsunami, and the port’s handling capacity had since been reduced significantly. The newly installed mechanical unloader can unload 400 tons per hour, about double the capacity of the old one, returning the port to its pre-quake capacity and helping revive the port and the surrounding area. 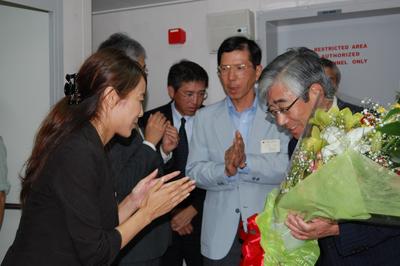 (At the get-together on board)
Mr. Hiroshi Kameyama, the mayor of Ishinomaki,
receiving the flowers bouquet
At the onboard get-together, Hiroshi Kameyama, the mayor of Ishinomaki; Mitsuhiro Ishikawa, the manager of the Ports and Harbors Development Division of the Miyagi prefectural government; Toru Haneda, the president of Ishinomaki Futo Silo Corporation; and Hiroyuki Kawasaki, the deputy general manager of the Livestock Production Department of Zen-Noh; joined a number of others in attendance.
Motoyuki Nose, a managing director at NYK Global Bulk, commented, “This new unloader should have a great impact, and I would like to recognize the endeavors made by all related parties. The NYK Group has supported the recovery of the tsunami-devastated area by offering refrigerated containers and sending volunteers to Rikuzentakata city. The NYK Group has its foundation in Japan and shipping, and the group is thus delighted to be able to contribute to the recovery through our main business, “monohakobi” (transportation).” Mayor Kameyama remarked, “Because the import of livestock feed was disturbed by the earthquake, there was a period when stockbreeders in the Tohoku region found it difficult to obtain enough livestock feed. Thanks to livestock feed ventures based in Ishinomaki, those stockbreeders were eventually able to obtain necessary stock and thus recover. Since there is a strong relationship between stockbreeding in the Tohoku region and Ishinomaki port, we believe it’s impossible to develop stockbreeding in the Tohoku region without the development of the port of Ishinomaki, so we would like to lead the recovery effort for the port of Ishinomaki in cooperation with companies in Ishinomaki. We also wish to promote the integratation of Ishinomaki port with the ports of Shiogama and Matsushima, which are located in the same prefecture and will thus support Miyagi’s economy.”
New Pride was the first oceangoing vessel to enter the wharf after the new unloader became operational. The vessel was carrying about 49,000 tons of grain, including corn and soybeans, to be used for feed, and about 30,000 tons was discharged at this port.
The NYK Group is hopeful that the stable transport of grain for feed will lead to lasting food production and thus contribute to the speedy recovery of the area.
About New Pride
Length Overall: 189.99 meters
Breadth: 32.26 meters
Gross Tonnage: 32,379 tons
Deadweight Tonnage: 58,761 tons
Flag: Panama
Built year: 2009
Loaded Cargo: about 49,000 tons of grain
The news on this website is as of the date announced and may change without notice.