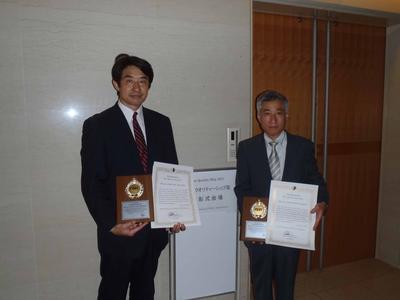 The NYK-owned containership NYK Arcadia, and the LNG carrier Pacific Eurus, managed by NYK LNG Shipmanagement, an NYK Group company, (Operator: LNG Marine Transport Limited)1 have received the Best Quality Ship Award for 2011 by the Japan Federation of Pilots’ Associations (JFPA).2 An awards ceremony was held on June 21 at the Todofuken Kaikan in Tokyo and was attended by pilots from all over Japan and related parties.

The Best Quality Ship Award was first presented in fiscal 2003 by the JFPA with the aim of enhancing awareness of the need for environmental conservation within our ports and oceans through safe vessel operations. Pilots performed comprehensive evaluations of vessels that requested pilot operations at pilotage districts throughout Japan during the months of September and October 2011, and then selected seven ships to be recognized for their excellent operations.
The selection process included extensive assessments of compliance with regulations related to embarking and disembarking facilities; the implementation of safety measures; accurate manipulation of nautical instruments and ship-operation devices; improvements to sea charts relevant to the water district; comprehensive training of bridge crew as to Bridge Resource Management;3 directive and command systems on board the vessel, and systems in place for easing cooperation with pilots.
Encouraged by this award, NYK will continue the company’s efforts for the safe operation of its vessels.
1 LNG Marine Transport Limited: Established in 2004 in Tokyo. The company engages in the business of LNG marine transport and its agents. (Investment percentages: 70% Tokyo Electric Power Company Incorporated; 15% Mitsubishi Corporation; 15% NYK)
2 The Japan Federation of Pilots’ Associations (JFPA): Under the revised Pilotage Law in April 1, 2007, the JFPA was founded as an incorporated national federation composed of district-wide pilot associations.
3 Bridge Resource Management: Management method employing the concept of Cockpit Resource Management developed by the National Aeronautics and Space Administration (NASA). This method aims to utilize human resources on the bridge from where a ship is controlled, and to improve human/machine interfaces.
The news on this website is as of the date announced and may change without notice.