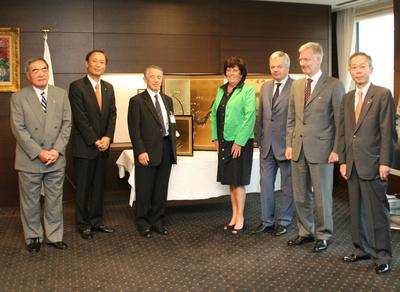 Mr. Kudo offered his appreciation for the support of the NYK Group’s businesses in Belgium, emphasized the admiration so many have for the country as a European logistics hub, and stressed NYK’s desire to strengthen the automobile terminal, bulk shipping, and logistics businesses the group has in Belgium. Prince Philippe mentioned that the contribution made to the Belgian economy and the employment brought to the country by the NYK Group have resulted in greater friendship between Japan and Belgium.

NYK continues to strive to provide services that satisfy our various customer needs, as a bridge not only between Belgium and Japan but also the remainder of Europe and the world.