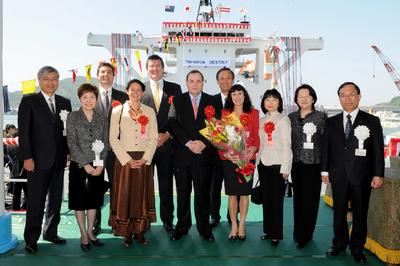 On May 11, Taharoa Destiny, a new 175,000 DWT class vessel dedicated to the transport of ironsand slurry,* was delivered to NYK. 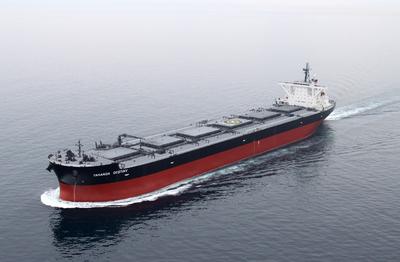 The vessel will be chartered to New Zealand Steel Mining Ltd. under a long-term contract and is expected to transport 1.2 million tons of ironsand slurry annually from New Zealand to China and Japan for 15 years. New Zealand Steel Mining Ltd. is a subsidiary of New Zealand Steel, which became a part of the BlueScope Steel Group in 2002.
NYK continues its efforts to provide stable transportation for natural resources.
<Vessel particulars>
Length Overall: 290.40 meters
Breadth: 45.00 meters
Designed Draft: 18.20 meters
Gross Tonnage: 90,267 tons
Deadweight Tonnage: 175,522 tons
Builder: Mitsubishi Heavy Industries Ltd.
* Vessel dedicated to the transport of ironsand slurry
A pipeline from shore is used to load this vessel by pumping the ironsand slurry into the vessel cargo holds. After the loading operation is completed, the water in the hold is discharged before the ship sails from port. This is the only vessel in the world designed to load ironsand slurry and thus requires advanced operating and loading/discharging technique and know-how.
The news on this website is as of the date announced and may change without notice.