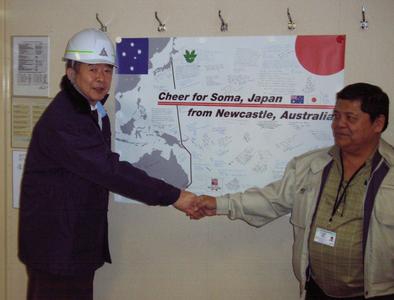 The 87,000 DWT NYK-operated bulk carrier, Shirakumo, arrived at the port of Soma’s wharf No. 5 in Fukushima prefecture on February 9. Shirakumo is the first coal carrier to berth at the wharf since the Great East Japan Earthquake.

The ship was carrying 63,000 tons of coal from Newcastle, Australia, destined for the Shinchi thermal power station of Soma Kyodo Power Co. Ltd.* (headquarters: Soma, Fukushima prefecture; president: Kiyoshi Igarashi). Through the efforts of related parties, operations at the wharf could be resumed and more coal will be expected to make its way into the region, resulting in a dramatic recovery of coal shipments into the area.
A poster containing encouraging messages from many citizens of Newcastle, including coal-exporting-related parties, was also delivered to Soma Kyodo Power Co. Ltd. by the vessel. NYK hopes the wharf is actively utilized for reconstruction of the affected areas. 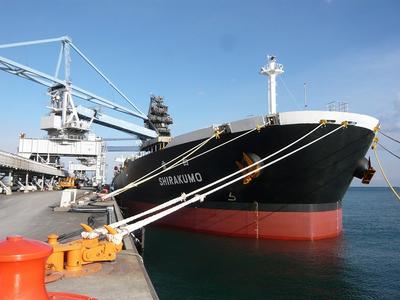 (SHIRAKUMO arrived at the port of Soma?s wharf No. 5)

NYK will continue its efforts to aid reconstruction of the affected area and help maintain a stable supply of energy resources.