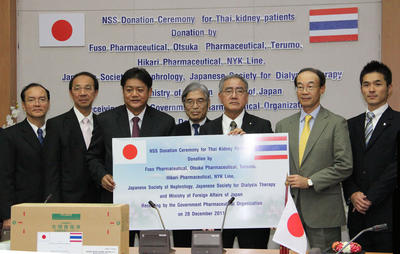 NYK expresses its deepest compassion to the people and regions of Thailand that are suffering from the country's worst-ever recorded floods that took place last year, and wishes for an early recovery for the victims and damaged areas. To this end, the NYK group is providing free ocean transport for relief supplies, and in addition the group has donated a total of 3 million baht.

As a part of providing free ocean transport, relief supplies, including drinking water and Normal saline Solution, to the amount of 33 TEUs (33 20-feet containers) were transported by the group’s containerships for delivery to the damaged area by the Thai government and other parties during December 2011 to January 2012. A donation ceremony for Normal saline solution held at the Ministry of Public Health in Thailand on December 28, was attended by Mr. Seiji Kojima, Ambassador Extraordinary and Plenipotentiary of Japan to the Kingdom of Thailand, representatives from companies provided relief supplies, and Minoru Sato, president of NYK (Thailand) Co. Ltd.
In the hopes of aiding victims of the disaster through our supportive actions to the greatest degree possible, the NYK group will strive to be proactively involved in contributing to society as a good corporate citizen.
The news on this website is as of the date announced and may change without notice.