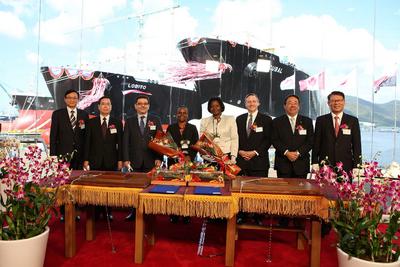 Toshiaki Urashima, operating officer of the Marine & Aerospace Business Unit at Mitsui; Peter Evensen, president of Teekay; In-Sik Roh, president and CEO of Samsung; and NYK director and managing corporate officer Hitoshi Nagasawa were in attendance. Ms. Arnalda Vandunem of Sonangol, the Angolan national company, named one vessel Lobito, and the other vessel was named Cubal by Ms. Filomena Oliveira of Sonagás, the natural gas subsidiary of Sonangol. The ceremonial rope holding the vessels in place was then cut by the two women. The charterer, ALSS, was represented by Mr. Antonio Orfao, management committee chairman and Mr. Bill Hauhe, general manager.

Lobito and Cubal are jointly owned by NYK LNG (Atlantic) (33%), Mitsui (34%), and Teekay (33%). Lobito was completed on October 31, and Cubal will be by January 12, 2012. The vessels are the third and forth of four sister vessels, following the first two sisters, Soyo and Malanje, which were completed in August and September. These four vessels will be used for shipments of LNG from Angola to the global market under 20-year time charters.

More attention is being given to clean-energy LNG in response to growing environmental concerns, and the NYK Group continues to provide services that meet the expanding demand for stable, economical transport of LNG.
§ Vessel Particulars
Cargo capacity: 160,276.4 m3
Length overall: 285.00 meters
Breadth: 43.40 meters
Gross tonnage: 100,800 tons
Shipyard: Geoje Island shipyard of Samsung Heavy Industries
The news on this website is as of the date announced and may change without notice.