NYK Holds Charity Cruise aboard Asuka II
- Raises $100,000 for Education in the Philippines - 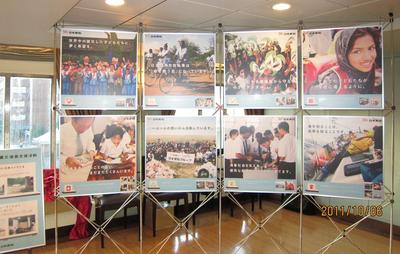 In cooperation with Plan Japan,* NYK hosted a charity cruise on its luxury cruise ship Asuka II to raise funds for the improvement of the educational environment of Filipino children. Asuka II is operated by NYK Cruises Co. Ltd., and the event was held to commemorate the 20th anniversary of NYK’s return to the cruise business. The cruise proceeds, $100,000, were donated to Plan Japan, and will be used to support the education of Filipino children.

The charity cruise departed the port of Yokohama on October 5, made a call at the port of Shimizu, and then returned to Yokohama on October 7. Cruise events included panel displays introducing the social contribution activities of NYK and the activities of Plan Japan, a lecture by a board member of Plan Japan, and a workshop at which participants could experience wearing traditional ethnic clothing. At the display venue, passengers prepared message cards for children in the Philippines.
In the Philippines, some schoolchildren must study in very poor conditions, such as without classrooms or in dilapidated buildings. In addition, there are many other education-related problems, such as low school attendance and high dropout rates, which are attributed to a shortage of experienced teachers and the fact that some children have to walk from five to seven kilometers to school.
One of the United Nations' Millennium Development Goals is to “achieve universal primary education,” and NYK has been contributing toward this aim together with Plan Japan by building classrooms for primary and secondary schools and providing subsidies to cover school supplies, travel expenses, and dormitory fees for Filipino children.
Additionally, to support the people affected by the Great East Japan Earthquake, a donation box was placed on board Asuka II during the charity cruise. NYK matched the amount given by the passengers, and a total of about 270,000 yen was then sent to Plan Japan (a total of about 420,000 yen was sent as of October 31). Immediately after the earthquake struck, Plan Japan implemented a program to provide children with psychosocial care and improve their living conditions. The money raised will be used to support these activities.
NYK will continue its efforts to be proactively involved in social contribution activities as a good corporate citizen for the betterment of the world that we inhabit.
*Plan Japan, a Public Interest Incorporated Foundation
Plan Japan was established in 1983 and is a member of Plan, an international non-profit, non-governmental organization that promotes community development for children in developing countries. Sharing a common goal and mission with 21 donor countries, Plan Japan promotes community development in developing countries.
Website: http://www.plan-japan.org/english/
The news on this website is as of the date announced and may change without notice.