Shipboard trials of SCR NOx removal equipment were conducted during the voyage of Initial Salute. Once the equipment was verified to meet the tier III NOx emission controls stipulated by the International Maritime Organization (IMO),* it was decided to leave the equipment in place to collect more data through tests to be conducted during actual operational voyages. The installation of SCR NOx removal equipment after turbocharging, on board Initial Salute is the world's first trial on a low-speed marine diesel engine.
The new SCR NOx removal equipment will meet the tier III NOx emission control requirement by further reducing emissions while maintaining the superior combustion efficiency that is the main feature of a low-speed marine diesel engine.
It was initially thought that SCR NOx removal equipment would find it difficult to respond to future NOx emission controls because in an atmosphere of low-temperature exhaust gases below 300 C, ammonium hydrogen sulfate (acid ammonium sulfate) — generated by the chemical reaction of the sulfur in fuel oil with the ammonia in the reducing agent — poisons catalysts. However, the new SCR NOx removal equipment has been improved to reduce catalyst poisoning to a minimum level by suppressing the sulfur in fuel oil to approximately 0.1 percent. As a result, in an atmosphere of low-temperature exhaust gases at 250 C after turbocharging, stable denitration effects were observed during a test on land, which led to shipboard tests on an operational vessel with an eye to practical use.
Given the heightened awareness of environmental issues, NYK Line is proactively involving itself in reducing the environmental impact caused by its vessels. Oshima Shipyard, MHI, Akasaka Diesels, and Sakai Chemical have initiated, as a high-priority issue, R&D that focuses on future environmental regulations to be imposed on vessels. Since fiscal 2007, these companies have participated in the “R&D on Super Clean Marine Diesels” initiative, which is subsidized by The Nippon Foundation, and conducted by the Japan Marine Equipment Association under the leadership of the Ministry of Land, Infrastructure, Transport and Tourism. In addition, since fiscal 2010 the companies have also been involved in developing technology for a denitration system that will work with low-temperature exhaust gases of low-speed marine diesel engines, including shipboard tests, with technical cooperation from the National Marine Research Institute. Against this backdrop, NYK Line decided to cooperate in this research with the trial installment of SCR equipment on its own operating coal carrier.
The five companies will continue R&D activities related to the environmental field so as to contribute to the reduction of the environmental impact of the global marine industry.
* IMO Tier III NOx Emission Controls
The IMO-adopted MARPOL Convention is the main international convention covering the prevention of the pollution of the marine environment by shipping. In line with MARPOL Annex VI (Regulations for the Prevention of Air Pollution from Ships) that came into effect on May 19, 2005, NOx emission controls (tier I controls) for diesel engines installed on vessels were implemented in Japan. Later the convention was revised and a new NOx emission level (tier II controls) came into force on July 1, 2010. The revised regulation is a very strict one that aims to decrease NOx emission levels by a further 20 percent from that of the first regulation. Moreover, the third control was adopted in 2008, targeting vessels to be constructed from 2016 and limited to emission control areas, to seek the reduction of NOx emissions by about 80 percent from that of the first tier. 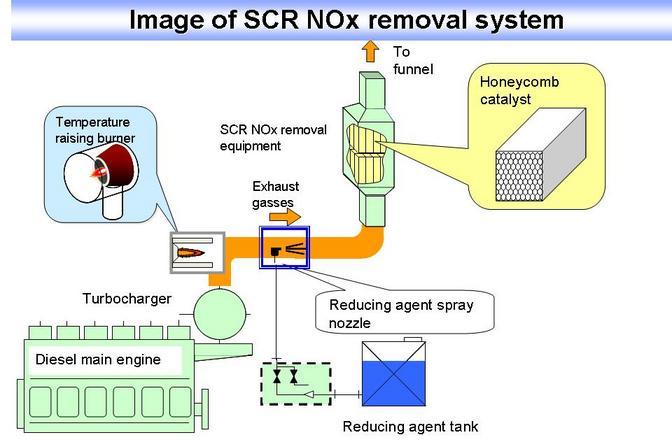 Media inquires may be directed to the following: