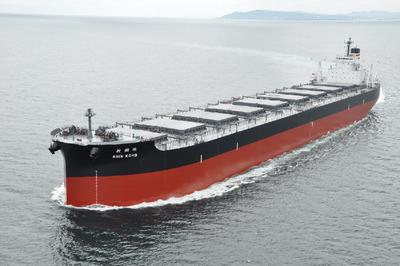 On May 31, NYK took delivery of a new 180,000 DWT bulk carrier, Shin Koho, at the Tsu Shipyard of the Universal Shipbuilding Corporation (Tsu City, Mie Prefecture). Shin Koho is the first carrier in the world to be fitted with a hybrid turbocharger, which was jointly developed by four companies: NYK, the Monohakobi Technology Institute (MTI), the Universal Shipbuilding Corporation, and Mitsubishi Heavy Industries, Ltd. Shin Koho will transport iron ore from Australia and other countries.

A turbocharger is a device that turns a turbine at high speed by utilizing exhaust gas from the main engine, then drives a compressor by the turbine, and finally supplies combustion air to the engine. While utilizing waste energy, a turbocharger boosts the output power of the engine by enabling it to aspirate at a level higher than that for the original engine displacement.
In addition to these basic functions, a hybrid turbocharger utilizes the extra rotational power generated by the turbine for electric power generation. Shin Koho can meet all its onboard electric power requirements for normal operation by using a hybrid turbocharger instead of diesel generators and by reducing the use of the diesel generator, the hybrid turbocharger contributes to a further reduction of CO2 emissions.
The technology development of the hybrid turbocharger has been selected as a subsidized project by the Ministry of Land, Infrastructure, Transport and Tourism under the “Support for Technology Development for Curtailing CO2 from Marine Vessels” project and supported by Nippon Kaiji Kyokai (ClassNK) as part of assistance provided through a joint research scheme.
NYK will continue to respond proactively to environmental issues through further innovations in technology.
l         Particulars of Shin Koho
Length Overall: 292 meters
Breadth: 45 meters
Designed Load Draft: 18.15 meters
Gross Tonnage: 93,031 tons
Deadweight Tonnage: 180,000 tons
Builder: Tsu Shipyard, Universal Shipbuilding Corporation
l         Hybrid Turbocharger Image 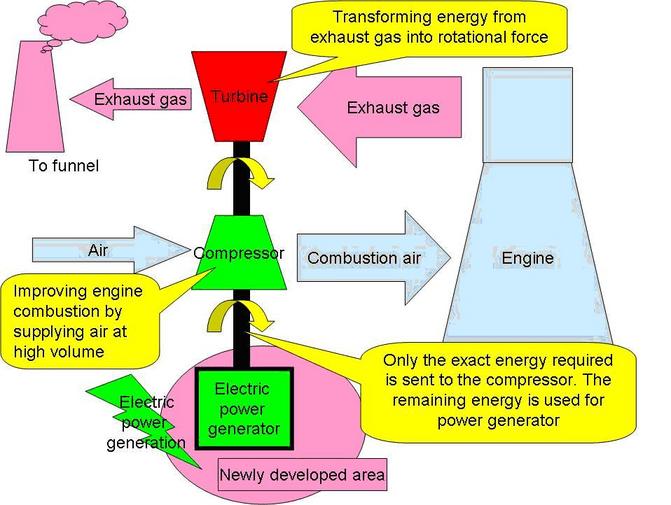