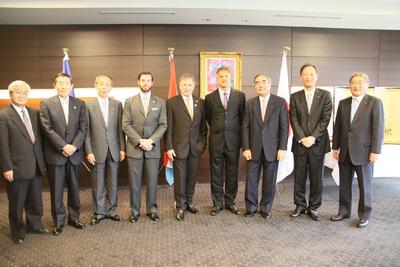 During the meeting, Minister Krecké introduced “Luxembourg for Business,” a trade-promotion agency established by the Luxembourg government and private economic organizations to encourage investing and promote products and services. Minister Krecké gave particular attention to the country’s advantage as a hub for logistics throughout Europe and Russia. The crown prince made a point of encouraging greater goodwill between Luxembourg and Japan. Moreover, he expressed his gratitude for NYK’s business activities, including the employment that the NYK Group brings to Luxembourg.
NYK president Kudo explained that NYK has a worldwide maritime transportation business network and marked the company’s 125th anniversary last year by expanding in the areas of logistics, particularly warehousing, land transportation, and air cargo transport. Moreover, Mr. Kudo stated that the NYK Group continues to make efforts to contribute to Luxembourg’s development, and Yusen Logistics and NCA are particularly proud to have Cargolux, a cargo airline partly owned by the Luxembourg government, as an important business partner.
Mr. Kusakari, who will become chairman of the Belgo-Luxembourg Market Council in mid-June, said that he continues to make every effort to improve the friendliness between Japan and Luxembourg.
The news on this website is as of the date announced and may change without notice.