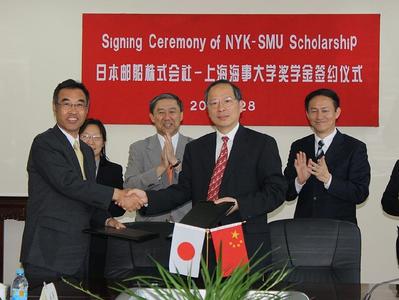 On April 28, 2011, Keizo Nagai, an NYK corporate officer and chief representative for China, signed a memorandum of understanding with Shanghai Maritime University (SMU) for NYK’s sponsorship of a third five-year (2011–2015) scholarship program at the university. During the signing ceremony, Mr. Nagai expressed his sincere gratitude for the support and aid provided by China after the March 11 earthquake and tsunami and his hopes that the NYK scholarships would continue to encourage excellent SMU students to become valued seafarers devoted to the shipping industry. SMU president Yu Shicheng expressed his appreciation for the support that NYK has given to maritime education for more than a decade, and acknowledged that the NYK-SMU scholarships are well recognized for their contribution to society and the community. President Yu also added his concern for those affected by the earthquake and tsunami, and his hopes for a quick recovery.

A week before the signing ceremony at SMU, Mr. Nagai visited Dalian Maritime University (DMU), another key maritime university in China, to sign a similar memorandum for NYK’s sponsorship of a third five-year scholarship program at DMU. Mr. Nagai’s commitment of NYK’s continuous support was received with great gratitude from DMU president Wang Zuwen.
NYK established dedicated scholarship programs in 2001 for teachers and students at SMU and DMU, the two key maritime universities in China, to support maritime education and cultivate talented seafarers. A total of 509 teachers and students have benefited from these scholarships over the past 11 years, and the commitment made by Mr. Nagai mirrored the mission statement of the NYK Group to work as a good corporate citizen for the betterment of the world we inhabit.
The news on this website is as of the date announced and may change without notice.