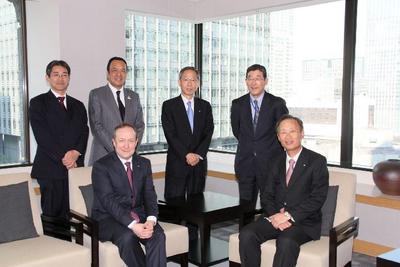 During the meeting, they exchanged opinions regarding a future LNG project, and confirmed that the two parties would further strengthen relations on ongoing joint projects including Sakhalin 2 project and Tangguh project in Indonesia.
President Frank expressed that he was extremely concerned about the situation in Japan following the massive earthquake and tsunami earlier in the month, and extended his compassion to the victims and regions that suffered the disaster. As to the situation at Fukushima No.1 nuclear plant, against the spreading of rumors have been circulating, which have caused some shipping companies to worry about calling at Japanese ports, NYK clarified the current status in Japan and said that port calls to Japan remained safe.
President Frank expressed cooperation by saying, “I will relay your explanation and information to Russian government officials and to related parties at ports and harbors in our country.” The two parties agreed to work for closer exchanges of opinions on port calls in Japan, and to take realistic and practical responses to the current situation.
NYK is engaged in joint vessel operation with OAO Sovcomflot as a partnership of joint ship owners with respect to two LNG vessels for the Sakhalin 2 project and two for the Tangguh project in Indonesia. In addition, NYK has consigned vessel management to OAO Sovcomflot for one NYK-owned LRII-type product tanker and one NYK-owned MR-type product tanker.
The news on this website is as of the date announced and may change without notice.