Yamatai Transports Aid to Survivors of Japan Earthquake and Tsunami - No.3 - 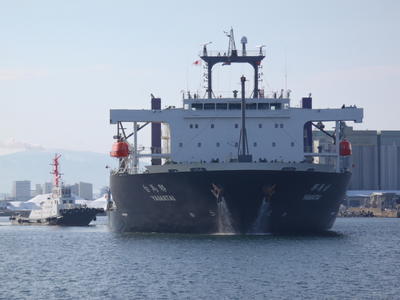 Yamatai entering the port of Hachinohe

NYK has completed delivery of the relief supplies that organizations donated to NYK and those that companies donated to the "First Relief Supplies Hotline," which was established by the Japan Federation of Economic Organizations and NYK. The goods safely arrived at the port of Hachinohe in Aomori prefecture at 8:00 a.m. on March 27 and were discharged from the vessel on the afternoon of the same day.

Yamatai, a module carrier operated by NYK-Hinode Line Ltd., a wholly owned subsidiary of NYK Line, was used for this transport. 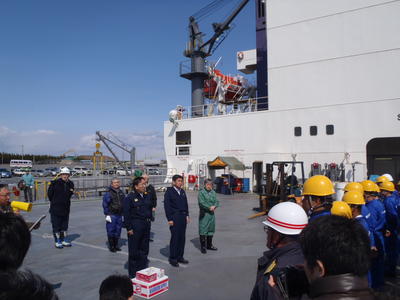 The ceremony held after the vessel's arrival

The vessel set sail from the port of Kobe on March 24 for the northeast region of Japan, where a massive earthquake hit on March 11 and triggered a devastating tsunami.

A ceremony was held upon the vessel’s arrival and attended by Aomori prefecture governor Shingo Mimura, officials from Aomori prefecture, Captain Oda, crew members from the vessel, and NYK staff members. At the port of Hachinohe, about 146 tons of relief supplies, including food, baby goods, and sanitary items were moved from containers to trucks and discharged. The discharged supplies were then transported on March 28 to each city, town, and village in the prefectures of Aomori, Iwate, and Miyagi.
NYK will continue to use its logistics and transport services, facilities, and networks across oceans, land, and air to demonstrate the group's commitment to social contribution activities.
The news on this website is as of the date announced and may change without notice.