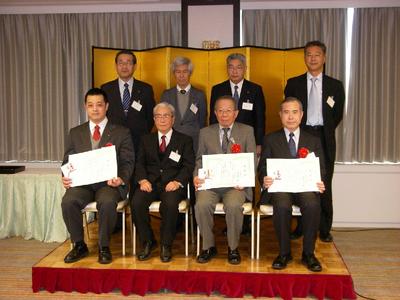 Masaharu Akamine, the first captain of the oceanographic research vessel Mirai, has been presented with a merit award by the Japan Hydrographic Association (JHA) for his contribution to hydrography.

The JHA was established as a public entity charged with improving, analyzing, and providing scientific and basic data on marine phenomena, while enhancing the levels of technology for marine and hydrographic surveys and investigations. The merit award is presented to those who have been engaged in marine and hydrographic surveys over an extended time using superior technologies, and to those who have contributed to fostering such engineers.
The award was bestowed on Captain Akamine in recognition of his highly accurate marine observations and contributions to the gathering of important observational data for more than 10 years as the first captain of Mirai,
NYK Group company Global Ocean Development Inc. manages operations and supports marine observations for Mirai, and the group also participates in exploration through use of the deep-sea drilling vessel Chikyu, which is operated by group company Mantle Quest Japan Company Ltd. (?)
The NYK Group works to support observations by and ensure the safe operation of research and exploration vessels, which are great assets to the island nation of Japan and through which the group contributes to the further development of marine surveys and investigations of benthic resources by gathering and distributing data on global-scale climate and environmental changes, including global warming.
Captain Akamine is currently the deputy director of the NYK Marine Museum and has donated the monetary prize accompanying this award to a Tohoku-Kanto Earthquake recovery fund.
* Mirai and Chikyu are owned by the Japan Agency for Marine-Earth Science and Technology (JAMSTEC).
The news on this website is as of the date announced and may change without notice.