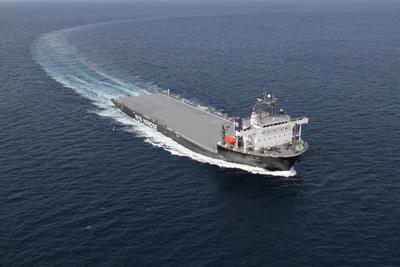 <It has been decided that Yamatai will be used to transport relief supplies provided by companies, local governments, and NPOs to the quake-stricken area. On March 24, loading will commence at the port of Kobe for a departure to Aomori at around "11:00" on the same day.>

The NYK Group offers its condolences to the victims of the Sendai earthquake and tsunami, and the company's wishes for a quick recovery of the area.

NYK created the Great Tohoku-Kanto Earthquake Task Force on March 14 and has since been examining various means to assist victims in the quake-stricken area. In this regard, NYK has offered the Japanese government the use of the module carrier Yamatai as an offshore platform for helicopters to be used to provide relief supplies to the quake-stricken area. Yamatai, operated by NYK-Hinode Line Ltd., a wholly owned subsidiary of NYK Line, is on its way to Japan.
Yamatai has a flat deck and is usually used to transport plant equipment, but helicopters can take off and land on its deck. The vessel can be positioned off Sanriku in Miyagi prefecture and can be utilized as an offshore platform for necessary relief supplies to the stricken area.
The vessel has sailed from Masan, Korea, and will arrive off Sanriku around March 20 at the earliest.
l         Vessel Particulars
Length Overall: 162.00 meters
Breadth: 38.00 meters
Draft (design): 6.344 meters
Gross Tonnage: 14,538 tons
Deadweight Tonnage: 19,500 tons
Flag: Panama
Built Year: 2010
The news on this website is as of the date announced and may change without notice.