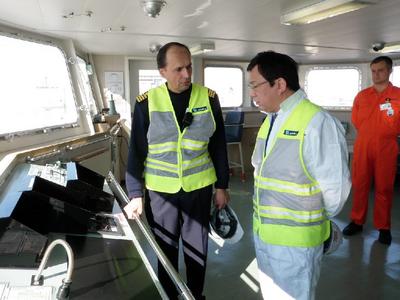 The NYK Group has completed its winter safety campaign, which was titled “Sail on Safety” and ran from December 1, 2010, through January 31, 2011. NYK carries out the campaign every year as part of its proactive measures to prevent accidents that are more likely to occur due to the turbulent seas which are more common during the winter months.

The NYK Group has continued to focus on safe ship operations and environmental activities by sharing with related parties throughout the year the understanding of risks to vessels. However, the possibility of marine troubles increases in turbulent seas in winter, so the safety campaign has been held every winter to warn related parties of risks. 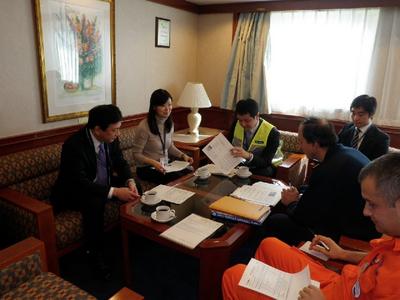 During this campaign, 345 NYK Group members, including NYK executives, visited 207 vessels to deepen communication between onboard crew and onshore staff by sharing current information about the vessel and exchanging opinions about safe ship operations. During the visit, crew members and ship operators discussed case studies that included how to avoid unsafe conditions that can lead to an accident. The visits also promote mutual understanding between onboard crew and onshore staff, and bring people together in a united effort to increase safety awareness.

An accident can have a great impact on not only the NYK Group but also society, so safe ship operations are increasingly important as the number of vessels we operate expands. The NYK Group will continue to strengthen its activities in the promotion of safety by reconfirming the basic notions of safe operations through safety campaigns.
The news on this website is as of the date announced and may change without notice.