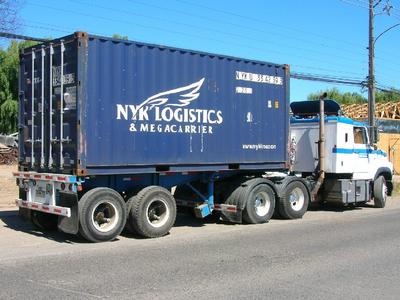 NYK has provided free ocean transport for seven TEUs (seven 20-foot containers) of relief goods to assist in the recovery from the devastating earthquake that occurred on February 27 in Chile. This shipment to Chile was coordinated with Japan Platform (JPF),1 an international emergency humanitarian aid organization, as part of the NYK Group – JPF Joint Aid Supplies Transportation Projects that NYK has been a part of since 2004.

The relief goods included blankets, sportswear, tissues, and a loading shovel, and were donated by four Japanese companies and shipped free by NYK in partnership with JPF. The relief goods arrived in central Chile at Valparaiso on October 24 and were then distributed by December 21 by the Institute of Cultural Affairs: Japan (ICA Japan).2
The NYK – JPF project was established during the aftermath of the immense earthquake that occurred in 2004 at the northern tip of Sumatra, Indonesia. Free ocean transport of over 1,200 tons of aid to many areas in need has since occurred.
The relief goods were distributed with a focus on the hospitals, facilities for the handicapped, and people, including fishermen, living in the tsunami-hit coastal areas. Students who received the goods mentioned that they would like to know more about Japan and also said with pleasure that they could receive the goods directly this time although they usually received such goods in donation ceremonies at school. 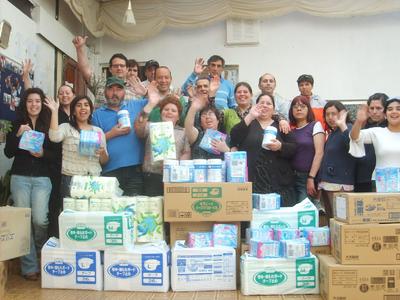 The NYK Group will continue its social contribution activities as it seeks a quick recovery of the area and its people.

Companies donating relief goods
l       Daio Paper Corporation: 600 sets of sanitary materials (goods), including baby and adult diapers, wet tissues, and bathroom tissues
l       Toyota Industries Corporation: one loading shovel
l       Kaneka Corporation: 1,000 blankets
l       ASICS Corporation: 19,216 items of sportswear and winter clothes
1Japan Platform (JPF)
Japan Platform is an international humanitarian assistance organization established to provide quick and effective emergency relief during natural disasters and refugee situations. The Japanese government, Japanese business community, and nongovernmental organizations are integrated equally to draw on the resources and unique features of each sector. Website: http://www.japanplatform.org/E/index.html
2The Institute of Cultural Affairs: Japan (ICA Japan)
ICA has been making use of the 40-year network of the Institute of Cultural Affairs in 30 countries around the world to have a positive impact on health, women’s issues, poverty, education, agriculture, the environment, and disaster relief. ICA Japan was established in 1982.
Website: http://www.icajapan.org/icajapane/indexe.html????
The news on this website is as of the date announced and may change without notice.