On November 19, the Japan Agency for Marine-Earth Science and Technology (JAMSTEC; president: Yasuhiro Kato) and Nippon Yusen Kabushiki Kaisha (NYK; president: Yasumi Kudo) concluded an agreement to cooperate in the deployment of profiling floats (called Argo floats) for global oceanographic observation. The Argo project is an international scientific project that NYK has agreed to assist in order to strengthen the observation network of these profiling floats. In fact, NYK’s contribution to this project is the first of its kind by a company in Japan’s private sector.

The profiling floats are requisite devices for the Argo project, which aims at building a real-time, high-resolution monitoring system of the world's oceans. The collected data are vital for research into climate change and global warming as well as the forecasting of oceanic currents necessary for fisheries and maritime industries.
The Argo project started in 2000, and the Japanese Argo floats have been deployed up until now by vessels operated by Japan-based public organizations, including universities, fishery colleges and high schools, the Japan Fisheries Agency, the Japan Meteorological Agency, and the Japan Coast Guard.
NYK will deploy Argo floats mainly in the Pacific Ocean by utilizing its far-reaching fleet of vessels that ply many shipping routes. This operation will enable steady and regular float deployment in oceanic areas rarely accessed by Japanese vessels operated by public organizations, thus greatly promoting research into climate change.
Outline of Basic Agreement
Project name: Cooperation to Deploy Profiling Floats for Oceanographic Observation (Agreement)
Agreement:   Concluded between Shiro Imawaki, executive director of JAMSTEC, and Hirokazu Akamine, NYK corporate officer
Details of Cooperation
Within the areas that NYK vessels sail, JAMSTEC conducts analyses of water areas in the Pacific Ocean (see map below) where vessels operated by public organizations transit with less frequency and in which the deployment of Argo floats is needed. Upon a request from JAMSTEC, NYK will confirm that its vessels transiting the appointed areas can deploy Argo floats.
Expected Results
In the Pacific Ocean, there are water areas that have lower observation density because vessels of cooperating organizations rarely pass through these areas, and the floats are often dispersed by ocean currents. If profiling floats can be deployed steadily and regularly in such waters, a real-time observation network would be established. This will allow for a better understanding of global heat and freshwater movement, and further promote research into solutions to global warming by allowing for analyses of climate change mechanisms and improvement of forecast accuracy.
l         Argo Project
Started in 2000, Argo is an international scientific project conducted under the auspices of the World Meteorological Organization (WMO), the Intergovernmental Oceanographic Commission of UNESCO (IOC), and 30 other institutions. The aim of the project is to build a real-time, high-resolution monitoring system of the world's oceans. Argo floats, the key devices of the project, drift up and down between a depth of 2,000 meters to the surface, measuring the temperature and salinity of the ocean. The aim of the Argo project is to deploy about 3,000 Argo profiling floats about 300 kilometers apart in the world’s oceans and thus gain a better understanding of the ocean structure.
l         Map
Areas where the Japanese Argo floats are planned to be deployed. 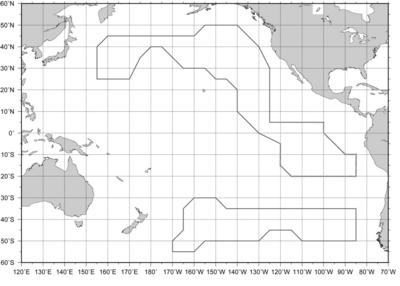 Areas where the Japanese Argo floats are planned to be deployed