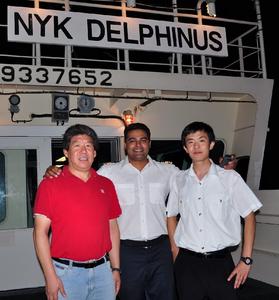 NYK launched the Chinese Pilots Training Program in cooperation with the China Maritime Pilots’ Association (CMPA). For CMPA, it’s the first training program to be conducted on Japanese carriers. This cooperation was organized and supported by the Ministry of Transport (MOT) of China. The joint program aims to provide Chinese pilots the chance to closely observe pilot operations at major international ports and further enrich their maritime and pilot-operation experiences through related training courses. Under MOT direction, CMPA selected excellent Chinese pilots, the youngest of whom is only 28, and recommended them for participation as trainees in this program.

Four Chinese pilots participated in recent training sessions on container vessels in the NCE trade (North & Central China East Coast Express). Two pilots boarded NYK Delphinus at the Shanghai Yangshan Terminal on July 16, and two boarded NYK Diana at the Shenzhen Shekou Terminal on July 17. All four safely returned to Shanghai at the end of September after a fruitful two-month training course.
NYK has arranged for ten Chinese pilots to attend onboard training in this program till the end of September, and another eight Chinese pilots are scheduled to attend before the end of March 2011.
The news on this website is as of the date announced and may change without notice.