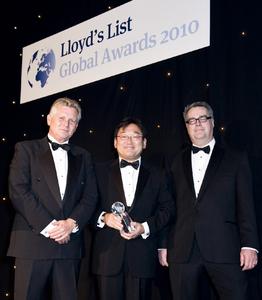 On September 29, NYK received The Training Award at the Lloyd’s List 2010 Global Awards. Together with colleagues, Shunichiro Mizukami, managing director of liner division in NYK Group Europe Ltd., accepted the award at a ceremony at London’s Dorchester Hotel.

NYK was given this award in recognition of the below three activities, which includes a new program by human resources to achieve safe ship operations.
1.        NYK’s establishment of the NYK-TDG Maritime Academy (NTMA) inside the Philippines, the country from which NYK recruits most of its crew members. To achieve security on board and safe ship operations, NTMA provides a wide range of its own maritime programs in addition to basic classes to foster high quality officers and engineers.
2.        NYK-Fil Ship Management Inc.’s receipt of the Presidential Award of Excellence in April 2010 from Philippines President Gloria Macapagal-Arroyo. The Philippines-based manning service company was recognized for greatly contributing to the revitalization of the employment of Filipino seafarers from the Philippines.
3.        NYK’s creation of a vessel operations meister program to encourage shore-based staff to improve their professional skills continuously and place a greater emphasis on safety and efficiency.
The Lloyd’s List Global Awards annually recognize a wide range of maritime excellence, from ship of the year, which last year was NYK’s own Auriga Leader, to company of the year, shipmaster of the year, and awards for corporate social responsibility and environmental protection.
Acknowledging that the future success of our company relies largely on the excellence and professionalism of our employees, we will continue to encourage our employees’ development through training and education to ensure safe ship operations to resultantly keep NYK as a company that can be trusted by society.
The news on this website is as of the date announced and may change without notice.