The vessel, which has a wide beam and shallow draft,* is a specialized coal carrier to operate for the Hokuriku Electric Power Company (Hokuriku Denryoku) and will be chiefly used to transport fuel coal from Australia and Indonesia to Hokuriku Denryoku's power plants.

At the naming ceremony held at the shipyard, related parties from Hokuriku Denryoku and NYK were in attendance and celebrate the maiden voyage of the vessel.

The vessel’s name is derived from the expression to “bring happiness to the land of Hokuriku,” which is in the snowy northwestern part of Japan’s main island. This is the fourth vessel to be named “North Fortune,” and the vessels adorn with this name have grown and improved in size over the years, the first in 1991 being 68,000 DWTs, the second 77,000 DWTs, and the third 90,000 DWTs.The NYK Group will continue its efforts for the steady transport of resources.

To enable bulk shipments to ports where the water depth is limited, the breadth of a standard 70,000-ton Panamax bulk carrier has been broadened and improved into a shallow-draft carrier. The deadweight tonnage of the bulker is 20,000 tons more than a regular Panamax bulker, resulting in an improvement in transportation efficiency. 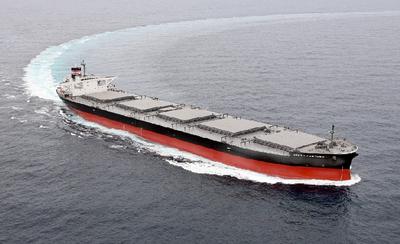