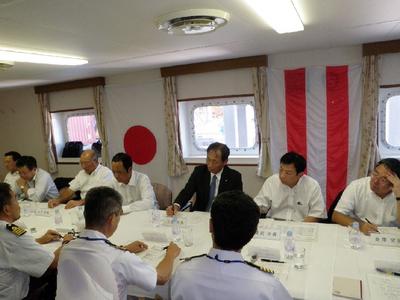 On August 25, NYK president Yasumi Kudo visited the 8,600 TEU containership NYK Orpheus (gross tonnage: 99,563 tons) and held an onboard meeting with four captains and four chief engineers, including the captain and chief engineer of NYK Orpheus, while the ship was loading at NYK Tokyo container terminal in Tokyo. During the meeting, President Kudo and the ship's officers exchanged opinions about the safe operation of the NYK fleet, and President Kudo then issued instructions to further promote activities in an effort to prevent serious accidents.

President Kudo chairs NYK’s Safety and Environmental Management Committee,1 which oversees the safe operation of the company's ships. He made the visit to the ship to hear directly from captains and chief engineers working on the frontline of operations and to make use of their opinions in improving the safety of ship operations.
During the onboard meeting, proposals for safety and vessel security were offered by the ship’s officers working on-site. In addition, issues facing seamen and initiatives to mitigate environmental loads were discussed in depth. After the meeting, the president and executive officers teamed for a tour of NYK Orpheus together with its captain and chief engineer to confirm the implementation of safety measures.
Every July, NYK conducts the Remember Naka-no-Se Safety Campaign.2 As a part of the campaign, the president, executive officers, and other company staff in relevant sections visit ships.
NYK continues to make efforts to further deepen the mutual understanding between onshore and ship staff, and promote the establishment of safer ship-operation systems within the group.
1Safety and Environmental Management Committee
Monitors activities on safety measures and environmental issues, and develops more specific and detailed approaches. The committee was established in April 2001 as a cross-sectional organization chaired by the president.
2Remember Naka-no-Se Safety Campaign
A campaign started in an effort to learn from the mistakes that led to an oil spill from an NYK VLCC when the vessel touched bottom at Naka-no-Se in Tokyo Bay in 1997. Every July, the month the incident occurred, top management and other staff visit NYK-operated ships to ensure the implementation of safe ship operations.
The news on this website is as of the date announced and may change without notice.