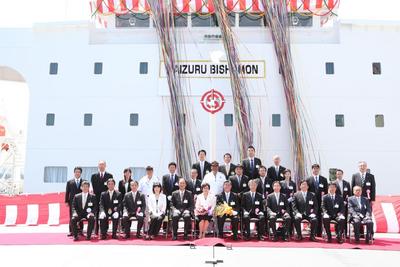 The vessel, which has a wide beam and shallow draft,* is the first specialized coal carrier for NYK to operate for the Kansai Electric Power Co. Inc. (KEPCO), and will be chiefly used to transport fuel coal from Australia and Indonesia to KEPCO’s Maizuru Power Plant in Maizuru City, Kyoto. The amount of coal consumed by the plant is expected to double when an additional unit at the power plant becomes operational in August. To reduce transportation costs and ensure the steady transport of energy, NYK’s specialized coal carrier has been adopted. 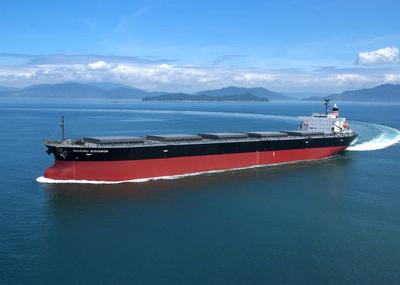 A naming ceremony was held at the shipyard on July 23 prior to the delivery of the vessel. Makoto Yagi, president and director of KEPCO and his wife, Yasumi Kudo, president of the NYK, and other parties were in attendance. Following the announcement of the name by Mr. Yagi, his wife cut the ceremonial rope.

The name “Bishamon” is well-known to Japanese as one of the seven gods of good fortune, which are believed to have arrived on a ship full of treasures bringing people good fortune.

On the day before the naming ceremony, Mr. Yagi, Mr. Kudo, Setsuhiro Kurokawa,  executive vice-president of Imabari Shipbuilding, and others visited Konpira Shrine (location: Kotohira-cho, Kagawa Prefecture), which enshrines a guardian deity of marine traffic, to pray for the safety of the vessel.
The NYK Group will continue its efforts for the steady transport of resources.
·         Vessel Particulars
Length overall:           229.93 meters
Breadth:                     38.00 meters
Designed draft:          12.80 meters
Gross tonnage:          48,029 tons
Deadweight tonnage: 88,165 tons
Builder: Imabari Shipbuilding Co. Ltd.
*Wide-beam and shallow-draft bulker
To enable bulk shipments to ports where the water depth is limited, the breadth of a standard 70,000-ton Panamax bulk carrier has been broadened and improved into a shallow-draft carrier. The deadweight tonnage of the bulker is 20,000 tons more than a regular Panamax bulker, resulting in an improvement in transportation efficiency.
The news on this website is as of the date announced and may change without notice.